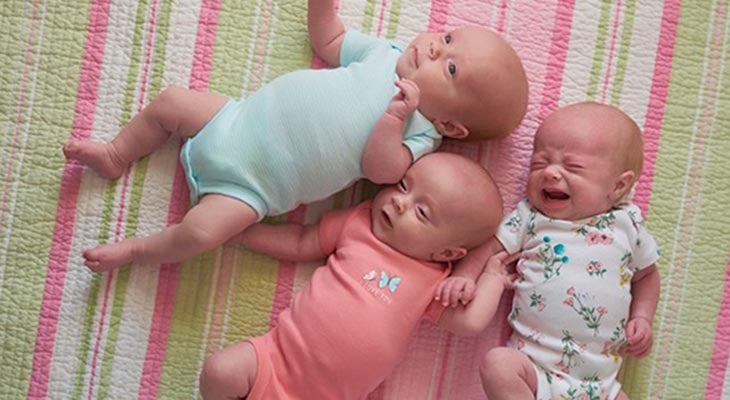 Looking ahead to their daughter’s third birthday in April 2016, last summer Jenna and Brian Richie began thinking about a second baby. A little brother for Madelynn would be nice, they thought. Little did they know their spunky, red-headed toddler would soon have three sisters.

About 5,000 sets of triplets are among the nearly 4 million babies born each year in the United States, according to the Centers for Disease Control and Prevention. The Richies’ babies were uncommon spontaneous triplets — conceived without fertility treatment.

“All three embryos come from one fertilized egg, so it comes down to the egg splitting not once, but twice,” she said.

After a positive home pregnancy test, Jenna had an appointment in August 2015 with Michelle Buck, D.O., Advocates for Women’s Health, a Part of Norton Women’s Care.

Jenna was excited to get an ultrasound and a first look at her new baby. Excitement turned to disbelief when the technician announced, “Wow! Looks like you’re having twins.”

“We pretty much said, ‘Well, we were planning on two, so what’s one more?’” Jenna said.

Dr. Buck referred Jenna to Dr. Jamie, who has delivered many sets of multiples. She and Dr. Buck often work together to help mothers meet the challenges of complicated pregnancies.

“We counsel moms about potential risks, and work with them on the goal to carry to full term,” Dr. Jamie said.

A week later, at Dr. Jamie’s office, Jenna got a second ultrasound — and even bigger news. She was having not two, but three babies.

A lot began happening behind the scenes to prepare for the triplets’ arrival.

“Our Fetal Board, with experts in obstetrics, maternal-fetal medicine, neonatology, pediatrics and pediatric cardiology, meets monthly to plan for these types of pregnancies,” Dr. Buck said.

Jenna’s ultrasound at 12 weeks showed the babies would be identical. Because identical triplets share the same placenta, there is a higher risk for complications. Their average gestation is 32 weeks, but according to Dr. Jamie, the aim is to maintain the pregnancy as long as mom and babies are safe and doing well.

“Every added day may save two to three days in the NICU (neonatal intensive care unit) and gives the brain and lungs more chance to develop,” she said.

Determined to make it past 32 weeks, Jenna spent her last 10 days of pregnancy at Norton Women’s & Norton Children’s Hospital on bed rest. During that time she worked with a lactation consultant on how to manage feeding three babies with her own milk and supplements.

Drs. Buck and Jamie planned to deliver the triplets together, but as concern grew over one baby’s growth, the delivery couldn’t wait. Dr. Buck explained that early delivery of triplets is not unexpected.

“Sometimes it’s an issue with just one baby, but all three have to be delivered,” she said. “That’s why it is vital that they deliver with the support of a high-level NICU.”

Delivered by Dr. Buck at 33 weeks, Kaylee, Ella and Lilah each weighed at or near 1,700 grams, the average weight for triplets. The girls were relatively healthy, according to Mary Jean Precious, R.N., NICU manager. “Being premature and not fully developed, their breathing and nutrition required a close watch, but they did quite well.”

Figuring out how they would tell the three apart once they left the NICU became an interesting challenge. Color coding proved to be the answer.

“We opted for nontoxic pink, blue and red nail polish for their toes,” Jenna said. “We also ordered identification bracelets for when they get a little bigger.”

The first time Jenna and Brian held all three girls at the same time together in the NICU was a joyful occasion. The big milestone came March 12, 2016, when the babies got to go home.

“With 12 diaper changes a day per baby, this was a huge help,” she said.

At home, the family was vigilant about keeping germs at bay. They did a whole lot of hand-washing and asked anyone with cold symptoms to forego visiting. Despite their efforts, in late March the triplets developed respiratory syncytial virus (RSV), a common illness that causes cold-like symptoms in older healthy children but can spell big trouble for tiny babies.

Kaylee was diagnosed first. With her oxygen level at 70 percent, she was sent from the pediatrician’s office to Norton Children’s Hospital. Just as Kaylee was improving, Lilah and Ella were admitted.

With all three girls on oxygen and intravenous fluids, Jenna and Brian spent an anxious, sleepless week between the babies’ two hospital rooms. Family and friends looked after Madelynn and saw to the family’s needs.

“It was definitely a rough time,” Jenna said. “We’re so lucky so many people are here for us, especially our parents.”

Jenna and Brian want every person and department that provided excellent care and kindness to their family to know how much they are appreciated.

“Everyone was amazing,” Jenna said. “We will be forever grateful for everything Norton has done for us.”

The Richies embrace having four girls under age 4 with full hearts and plenty of humor.

On an April afternoon at the family’s Bullitt County home, Brian watched the triplets tussle on a blanket. As one baby rolled to her stomach, he said with a grin all three would soon be able to turn over.

“I try not to think about what happens when they’re all crawling,” he said, laughing. “Sometimes it’s best just to focus on what matters most.”