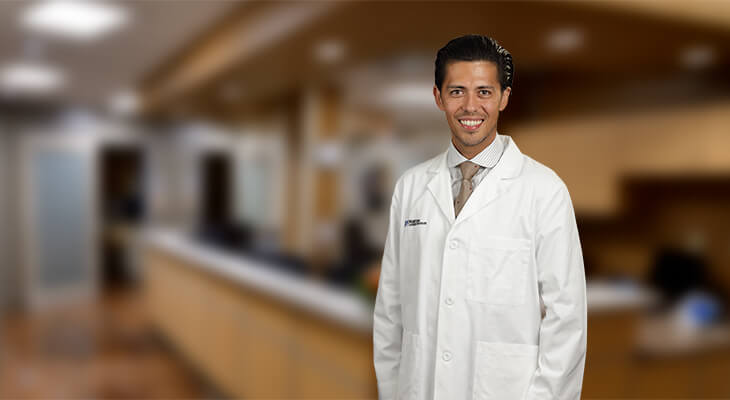 Radiation oncologist Dan Ishihara, M.D., Ph.D., likes to surf, but he is nothing like a stereotypical beach bum.

Dr. Ishihara earned both of his advanced degrees from the Albert Einstein College of Medicine in New York. Later, he trained with Robert Timmerman, M.D., who is a pioneer in stereotactic ablative radiotherapy (SABR) at the University of Texas Southwestern Medical Center in Dallas.

“I learned from the father of SABR,” Dr. Ishihara said.

Use of SABR has improved survival rates for people with early-stage lung cancer who are not good candidates for surgery. Its growing use also is improving outcomes, quality of life and cost-effectiveness for those with other types of cancer.

Passion for science and helping people

Dr. Ishihara, who sees patients at the new Norton Cancer Institute – Brownsboro, said he’s always had an interest in science and helping people.

“As a little boy, you dream of being a superhero,” he said. “For me, being a nerd, I wanted to be the superhero who could treat people in a time of need, and cancer care is really a time of need.”

Dr. Ishihara began doing research as an undergraduate at Johns Hopkins University in Baltimore. After graduation, he attended the prestigious National Institutes of Health-sponsored Medical Scientist Training Program (MSTP) at the Albert Einstein College of Medicine.

“Having no money or family in the U.S., the MSTP scholarship was the only way I could afford to go to medical school on a student visa,” said Dr. Ishihara, who was born and raised in Tokyo, Japan.

In addition to his medical degree, Dr. Ishihara earned a doctorate in cancer immunology.

Despite his work in the lab and in clinical research, Dr. Ishihara said he is drawn to caring for patients.

“In research, you test an idea. With patients, you get the human interaction. That’s the drive for me for wanting to be a doctor,” he said.

In addition to caring for patients, Dr. Ishihara will serve as a principal investigator of clinical trials at Norton Cancer Institute. He is excited to practice medicine where the focus is on quality whole-person care and patients can take part in the type of leading-edge clinical trials most nationally known cancer centers offer.

Dr. Ishihara began surfing in Japan as a teenager. His love for it didn’t end when he became a medical student in the Northeast.

“I’m crazy enough to surf in New York. On Saturdays, I would go down to Rockaway Beach at the bottom of Brooklyn and beginning of Long Island and surf in the freezing cold water,” he said.

After medical school, he did an internship year in Hawaii — a surfer’s paradise.

Dr. Ishihara joined Norton Cancer Institute in September 2018. He said he and his wife, Sian, love Louisville and are excited to put down roots here. They look forward to exploring the city while keeping surf resorts in their vacation plans. The couple has two daughters, ages 3 and 10 months.

“I feel we have found a place to grow,” he said.

Now that he’s no longer on the move, Dr. Ishihara got a dog for the first time in his life. Actually, he got two. At four months old, each of his Russian wolfhound puppies — Vanya and Lyosha — already weighs about 20 pounds.