Are you walking around with a silent killer in your abdomen? | Norton Healthcare Louisville, Ky.

Are you walking around with a silent killer in your abdomen?

Are you walking around with a silent killer in your abdomen?

David Green had no idea about his life-threatening condition 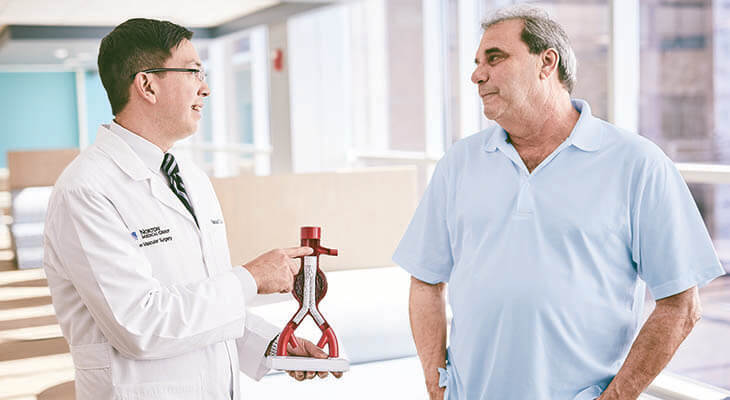 Over 1 million people are living with a potentially deadly abdominal aortic aneurysm (AAA) and don’t know it. One of them was 63-year-old David Green of Louisville, Kentucky.

An AAA is an enlarged area in the lower part of the aorta, the major blood vessel that supplies blood to the body. As the aneurysm grows, the risk of rupture increases. A rupture causes massive bleeding and often is fatal.

Though David didn’t feel any symptoms, his AAA could have ruptured at any moment. Fortunately, a long overdue diagnostic test detected the condition, and the team at Norton Heart & Vascular Institute was able to treat it.

“Abdominal aortic aneurysm is completely asymptomatic for most patients. They don’t even know that it’s there,” said Nathaniel Liu, M.D., vascular surgeon with Norton Heart & Vascular Institute. “It can be frightening when a patient learns they have this potentially life-threatening condition.”

“It’s pretty overwhelming, knowing that I didn’t feel bad at all. But I was literally facing something that could be terminal very rapidly,” David said. “It was overwhelming telling my family that I might not survive this.”

Fortunately, most AAAs can be detected with a simple and painless abdominal ultrasound. If found, the condition can be monitored or corrected by a vascular surgeon.

Who’s at risk for an AAA?

Several lifestyle habits and health conditions can signal a greater risk for an AAA. Those over age 50 with a history of the following are at greatest risk:

“As a young man I should have realized your body is going to break down if you don’t take care of it. I smoked for over 40 years, and I believed it was going to be the other guy with a problem. But it wasn’t the other guy — it was me,” David said. “Today when I see the Norton ‘N’ it’s emotional to me because Norton Healthcare actually has saved my life. I’m alive. By all rights, I probably shouldn’t be. I was at the best place I could have been for the care that I needed.”