Charles B. Palmer, D.O., has a passion for treating complex gynecologic cancer. 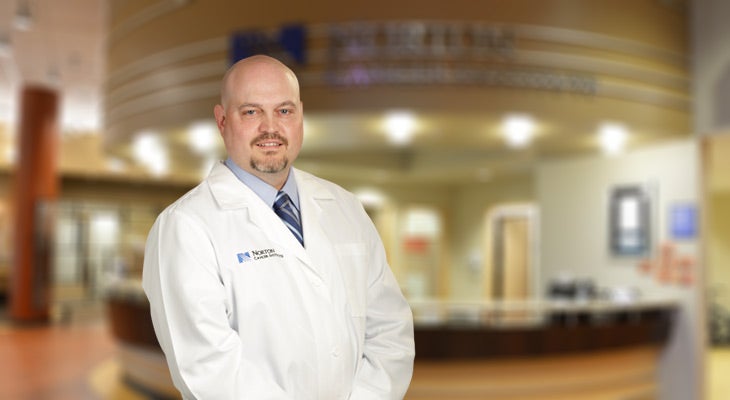 After working as an obstetrician/gynecologist for five years, Charles B. Palmer, D.O., was drawn to patients needing complex care. He decided to become a gynecologic oncologist, diagnosing and treating cancers in women’s reproductive organs.

“The patients you care for are so much more complex,” Dr. Palmer said. “They need your care so much and it’s gratifying to be able to help so many of them.”

“Cancer has touched so many people, and I want to do my part to take care of them,” Dr. Palmer said.

Originally from Northern Kentucky, Dr. Palmer attended Eastern Kentucky University in Richmond for his undergraduate education and earned his medical degree from the University of Pikeville-Kentucky College of Osteopathic Medicine. He completed his medical residency at the University of South Carolina in Greenville. It was there he first saw gynecologic oncology in practice and thought he might one day want to pursue the specialty .

That thought persisted even after he started in private practice as an OB/GYN in North Carolina. After five years, Dr. Palmer made the decision to leave his practice so he could fulfill his goal of becoming a gynecologic oncologist.

Dr. Palmer completed a three-year fellowship at WellSpan York Hospital in Pennsylvania in 2019.

“As luck would have it, I found my way back to Kentucky,” Dr. Palmer said. His wife, Karen, also is a physician. She works as a Norton Healthcare hospitalist.

When he’s not working, Dr. Palmer said he, Karen and their two school-age children enjoy being outdoors, hiking and camping.

With more than 100 specialists at locations around Louisville and Southern Indiana, Norton Cancer Institute is the area’s leading provider of cancer care.

More Options, Such as PARP Inhibitors, for Ovarian Cancer

Dr. Palmer said he’s become a gynecolgic oncologist at a time when advances in treatments mean women with cancers of the reproductive system have more and better options.

Women with ovarian cancer now receive chemotherapy before and after surgery, instead of only receiving chemo after surgery. The results are better, according to Dr. Palmer.

Immunotherapy also is on the horizon for cancers of the reproductive organs. Immunotherapy harnesses the body’s own immune system to fight cancer.

At Norton Cancer Institute, Dr. Palmer said his philosophy of care is simple.

“As soon as you come into my office, you’re now a part of my family. I treat you how I want anyone in my family treated,” he said. “So many women have touched my life. I feel like this is a very important subject for me to tackle, because cancer is so devastating.”