Carroll Grossman shares her breast cancer story and why her hero is her radiation oncologist, Dr. Aaron Spalding. 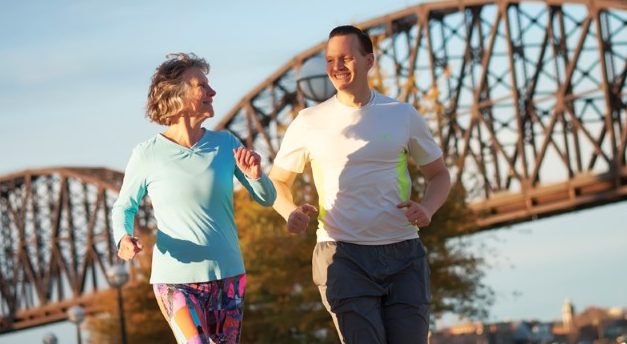 Carroll Grossman, a 71-year-old distance runner, felt in the best shape of her life when she found a lump in her left breast and was diagnosed with stage 2 breast cancer. At first, she denied it.

“I have always been about good health and couldn’t believe this was happening to me,” she said. “After the biopsy came back positive in the fall of 2014, I got into my car for the trip home shaking. I called my husband to help me calm down.”

A lumpectomy was performed. Afterward, Grossman pressed her surgeon about when she could lace up her running shoes. In three weeks, she hit the trails of Cherokee Park near her home, once again in her element, her spirits restored.

After the holidays, she began to fret again. Radiation was scheduled and she worried it would derail her running regimen. “Lovin’ the Hills,” a 50k trail run in Jefferson Memorial Forest, was coming up and she was determined to take part. Her son Eric, a nationally prominent runner, had founded the race. This was a command performance.

She asked her radiation oncologist, Aaron Spalding, M.D., Ph.D., if she could participate in the race. “Yes,” he emphatically replied, “and I’ll be there, too.”

True to his word, Dr. Spalding met Grossman on the steep 6-mile course. She told Dr. Spalding that if she lagged behind, he should go on ahead and double-back for her so they could finish together.

She recalled him saying, “No, I’ll just run with you however fast you’re going.”

That was in February, and Grossman has since kept her cancer at bay while staying active as a runner, eating a well-balanced diet and writing in her journal to cope with her disease.

“My three R’s are reading, writing and running,” she said.

During her darkest hours, what has sustained Grossman is running and writing friends and family, as well as the support from friends. But it is one radiation oncologist’s big heart, kindness and moral support that have impressed her the most.

“Dr. Spalding stands out as a shooting star, a comet that leads the way,” Grossman said. “He brought me along at a critical time and really encouraged me to be who I am.”