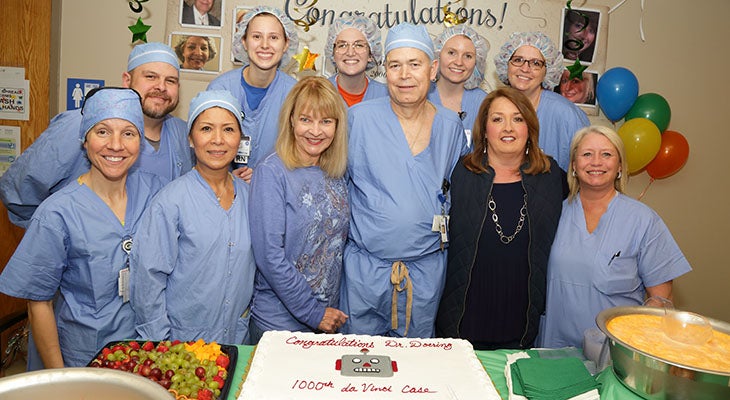 David L. Doering, M.D., gynecologic oncologist, Norton Cancer Institute, recently performed his 1,000th gynecologic procedure using the da Vinci Surgical System. He is one of only two gynecologists in this area who have done that many of the robotic-assisted procedures, which range from tubal ligations to removing pelvic masses to hysterectomies.

“When I first started in surgery in the 1980s, laparoscopy was just being developed,” Dr. Doering said. “We didn’t have video cameras. You just held the laparoscope and looked through it with one eye. Then in the early 2000s the robotic technology became available. First it was just a robotic arm to hold a camera, and it responded to voice command. Then in the late 2000s, the da Vinci system became available.”

Based on the number of procedures he has performed using the da Vinci system, it’s clear that Dr. Doering prefers it to conventional surgery.

Our cancer care team has the experience to diagnose cancer and offer precision treatment that minimizes side effects.

“In my view it is much better for the patient,” he said. “We can do operations that tend to be difficult, complex dissections, and I can do them through ‘band-aid’ or ‘keyhole’ incisions. There is much less blood loss, less trauma to the abdominal wall, much shorter recovery times, much less postoperative pain.

“Plus, ergonomically it’s better for the doctor, because you’re not hunched over an operating table. You sit in a relatively comfortable position, and the control panel can be adjusted individually for each doctor.”

A family history of physicians

“It’s very rewarding,” he said. “Obviously, we can’t cure everybody, but we help almost everybody. Even patients with advanced cancer who can’t be cured, we often can extend their lives and help them have a better quality of life for the time they have left.

Dr. Doering’s inspiration to become a physician came from his great uncle, Andrew Doering, one of his grandfather’s brothers.

“I had several great uncles who were doctors, and Andrew was the one I knew best,” Dr. Doering said. “He was a family doctor. I looked up to him. I just never really wanted to do anything else but be a doctor from a very young age.”

Dr. Doering and his wife named their son Andrew after the great uncle, and he has become an OB/GYN physician.

Norton Women’s & Children’s Hospital, as well as two Norton Healthcare surgeons, are recognized as a Center of Excellence in Minimally Invasive GynecologyTM (COEMIG). The designation is for doctors and facilities that provide safe, high-quality surgical care. Norton Healthcare is the only provider in the Louisville area with the designation.