Whether you have dense breast tissue or not, your insurer may cover a 3-D mammogram. It’s worth checking. 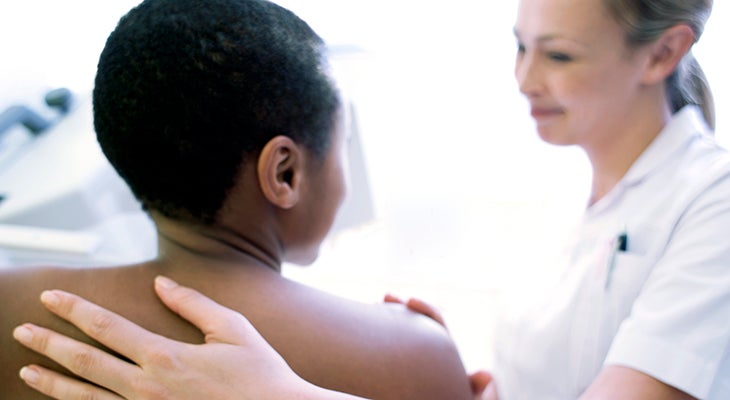 Dense breast tissue can make it hard to find cancers on mammograms because dense tissue and cancers both look white on a mammogram. By comparison, fatty tissue looks dark.

In July, Kentucky became the 30th state to require physicians to tell women if they have dense breast tissue. Whether a woman needs to consider additional screening options depends on her personal risk for breast cancer.

One option is a 3-D mammogram, also called tomosynthesis mammography. A 3-D mammogram involves the same breast compression as a traditional 2-D mammogram. It just takes a few seconds longer.

The difference between 3-D and 2-D mammograms

“There have been studies that show 3-D mammography increases the cancer detection rate and produces a lower rate of false positives. Studies also show that women of all breast densities benefit from the incorporation of tomosynthesis, though for different reasons,” said Shannon O. Steed, M.D., a diagnostic radiology specialist at Norton Healthcare.

A false positive occurs when a possible abnormality is seen, but no cancer is present.

Dr. Steed says insurance companies are starting to pay the charges for 3-D mammograms, regardless of a woman’s breast density, and that women should check with their insurer.

Read More: What it means to have dense breasts

Three-D mammography can help reduce the number of times women need to come back for additional imaging that confirms they don’t have cancer. Since 3-D imaging reduces the number of callbacks, that means less anxiety for the patient, according to Dr. Steed.

Dense breasts have less fatty tissue, and only radiological testing can identify the tissue.

Do you have dense breast tissue?

Based on the density of breast tissue on a mammogram, radiologists determine if the breast density falls into one of four groups:

If you fall into the last two categories, you are considered to have “dense” breast tissue. Two out of five women have dense breast tissue.

Postmenopausal obesity also increases the risk, and those women typically do not have dense breast tissue on a mammogram, according to Dr. Steed.

Overall, women in the U.S. have a one in eight chance of being diagnosed with breast cancer at some time during their lives.