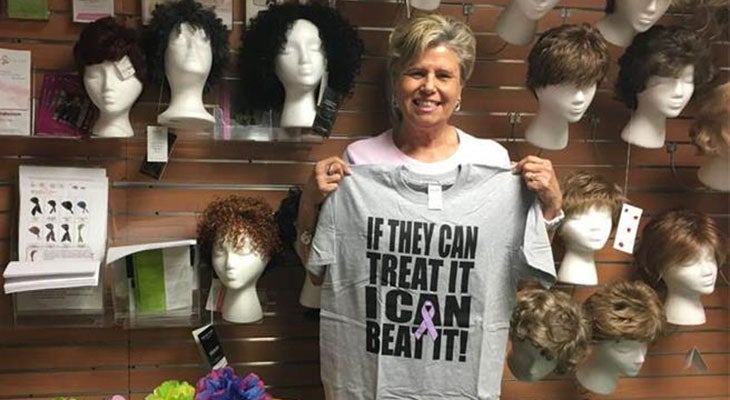 The retired schoolteacher is in remission but gets ongoing therapy and monitoring. She was diagnosed in 2017 with metastatic breast cancer that had spread to her abdomen and ravaged her liver.

Paula’s cancer journey took some unusual twists. She had no family history, never missed a mammogram and never felt a lump. Even later, advanced scans would find no breast cancer tumors.

According to Patrick Williams, M.D., oncologist/hematologist with Norton Cancer Institute, advanced breast cancer that has spread is rare in Paula’s age group these days.

“Current screening guidelines and the widespread effectiveness of mammography have been game-changers,” he said.

Paula’s challenge began with feeling exhausted. The self-described “Energizer bunny” went to her primary care doctor, where tests showed her liver enzymes were seriously high. As she awaited more tests, severe abdominal pain sent her to the emergency room, where she was diagnosed with stage 4 liver cancer.

“My husband and I were in total shock,” she said.

Paula was admitted and things looked grim. Her oncology team worked quickly to answer a critical question: Where did this cancer start?

“Once we know the tumor’s source we have specific, sometimes even individually tailored therapy that can immediately improve a patient’s symptoms, function and often extend their life,” Dr. Williams said.

Tests ruled out various primary sources, including Paula’s colon and pancreas. Molecular DNA analysis then revealed a surprising result: The primary source was breast cancer. This was actually good news. It was a very treatable type of cancer and was expected to respond well to therapy.

On the 10th day after starting treatment, Paula awoke and thought, “Wow, I feel like my old self.

Dr. Williams said that molecular testing — sometimes called next generation sequencing or immunologic profiling — has become a standard of care for many solid tumors, leukemia, lymphomas and myeloma. Analyses can be done on tissue and blood.

Cancer specialists, like Dr. Williams, are excited about the promise of advanced genetic testing and immunotherapy to treat cancers that were once considered incurable.

“We are in the Golden Age of cancer immunotherapy and molecular biology with the real potential to see cancer become a chronic disease and not the widespread killer we now experience,” he said.

These days, Paula volunteers as a lay counselor for other patients. The petite blonde with a radiant smile was thrilled to walk in the 2018 Kentucky Oaks Survivors Parade and help raise breast cancer awareness.

When one of her doctors commented on her positive attitude, Paula was inspired to design a T-shirt that carries her message of hope. Bold letters proclaim: “IF THEY CAN TREAT IT I CAN BEAT IT!”

Paula and her family raise funds to produce the shirts she gives out to patients, clinics and support groups. Each comes with a personal message from Paula:

“Dear Survivor: I hope as you wear this shirt you will also choose my motto. It worked for me! Love and encouragement. In remission as of May 2017.”