Urogynecologist: If a pelvic condition bothers you, don’t assume it can’t be treated

Urogynecologist: If a pelvic condition bothers you, don’t assume it can’t be treated

One in three women will suffer from pelvic organ prolapse, urinary incontinence, fecal incontinence or some other pelvic floor disorder. Even so, many put off getting treatment. 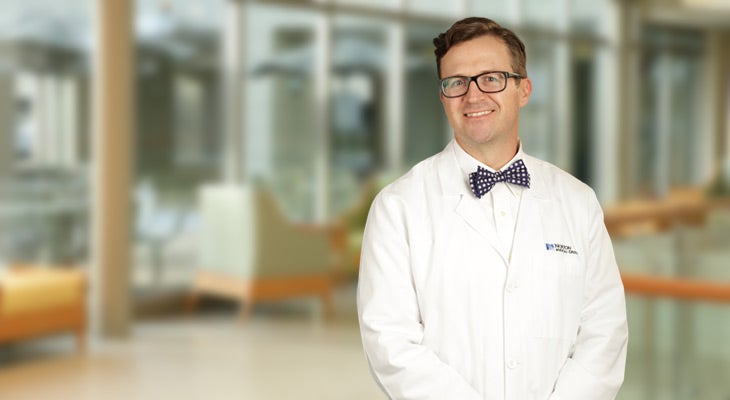 Ryan Stewart, D.O., a urogynecologist treating women’s pelvic conditions, has a simple test for whether a woman should see him.

“If it’s bothersome, it’s worth talking to your doctor about,” said Dr. Stewart, who sees patients at Norton Urogynecology Center.

“I chose obstetrics and gynecology because I enjoy taking care of women as patients,” Dr. Stewart said.

“I tell my patients it’s common, but it’s not normal,” he said.

According to Dr. Stewart, he always listens to patients to find out what is important to them and come up with an individualized treatment plan.

“I really want to understand what their goals are,” Dr. Stewart said.

He said some patients are concerned with how they look or feel, while other are more focused on function. For example, it may be painful to lift a child or grandchild.

Pelvic organ prolapse occurs when a woman’s organs drop from their normal position and press against the walls of the vagina. Risk factors for pelvic organ prolapse include childbirth, repeated heavy lifting, previous surgery, genetics and chronic diseases.

Norton Healthcare is the leading provider of urogynecology care in Louisville and Southern Indiana.

“I take my care philosophy back to the root of the word doctor. The Latin root of doctor is to teach, and I really feel that is the doctor’s primary role,” Dr. Stewart said. “I want the patient to learn more about their condition and themselves. I really want them to understand what it is we’re trying to accomplish.”

Medicine Was a Calling He Couldn’t Ignore

Dr. Stewart is married with a young son. When he has free time, he said he likes to play with his son, write software, work on microelectronics or do woodworking.

Dr. Stewart grew up in rural Winchester, Tennessee. He attended the Edward Via College of Osteopathic Medicine in Blacksburg, Virginia. He then did his medical residency in obstetrics and gynecology at Indiana University, Indianapolis, and completed a fellowship in female pelvic medicine and reconstructive surgery in Louisville.

He didn’t enter medical school straight out of college. Instead, he worked for 10 years in jobs as diverse as director of marketing for an outdoor adventure company and in pharmaceutical sales. He said he always felt the pull of medicine.

“It really was a calling for me. This voice kept popping up in my head. Unless you do what you’re supposed to do, you’re not going to be happy,” Dr. Stewart said.

Finally, he listened to that voice and went back to school to become a doctor, and he has not looked back.