Is heart disease hereditary? Three brothers know the answer and are staying healthy together

Is heart disease hereditary? Three brothers know the answer and are staying healthy together

A family history of heart disease is one risk factor that can’t be controlled. But you can take steps to stay healthy. 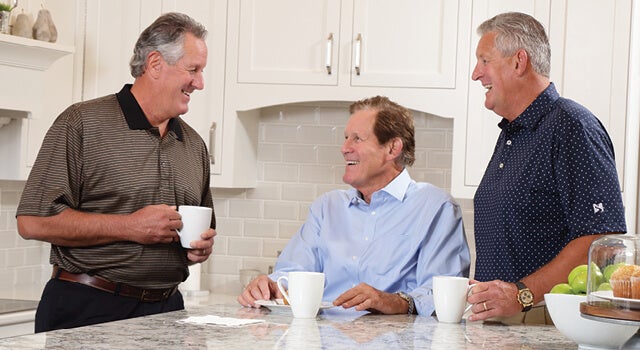 “Life is better with brothers.”

Words from an unknown author uttered by many, including the King brothers, Jerry, David and Larry of Louisville, Kentucky.

These three brothers have grown up doing everything together — playing sports, attending church, raising families, even vacationing together. Now the three are fighting heart disease together.

“We all are very active and would appear healthy,” said Jerry, 71, the oldest child of seven siblings. “But here we are seeing the same cardiologist, changing our eating habits and taking medications to fight against this disease.”

The youngest brother, Larry, 58, was the first to experience a heart event. He and his wife, Paula, set out for a July weekend at the lake in 2011. They started Saturday with a 5-mile walk, enjoyed time on the water and had a relaxing evening with friends. By Sunday morning, things started to feel different.

“I just wasn’t feeling myself, but I thought it was the heat and humidity,” Larry said. “I told my wife I wasn’t feeling well and wanted to go inside to the air conditioning. Fortunately, she insisted that we go to the hospital.”

Paula took Larry to Twin Lakes Regional Medical Center in Leitchfield, Kentucky, where he was immediately diagnosed with a heart attack.

The emergency department activated a heart attack response protocol, putting interventional cardiologists and the catheterization lab at Norton Hospital on alert to receive a critical patient.

“I remember bits and pieces from that point, but I clearly remember seeing two helicopter pilots in my hospital room and them telling me I was taking the fast ride back to Louisville,” Larry said.

Once he arrived at Norton Hospital, Larry was stabilized and evaluated. Plans were made for a cardiac catheterization. Ibrahim Fahsah, M.D., interventional cardiologist with Norton Heart & Vascular Institute, performed the procedure to open one of Larry’s main arteries with stents.

“A stent was placed in the left anterior descending (LAD) artery — the largest of three arteries that supply blood to the heart,” Dr. Fahsah said. “An LAD blockage has a very low survival rate and is more common in men, earning it the name ‘widowmaker.’”

Brother to brother: It’s not if. It’s when.

“Having met Dr. Fahsah during Larry’s procedure and just grasping what my brother had been through, I was taking notice of my own health,” Jerry said. “I noticed I was having trouble catching my breath, and I generally didn’t feel well. Larry encouraged me to call Dr. Fahsah.”

Dr. Fahsah ordered some routine tests. Jerry passed with flying colors, but Dr. Fahsah was not convinced, because Jerry was still experiencing symptoms consistent with atherosclerosis, or calcium buildup in his arteries. He ordered a calcium score test, a computed tomography (CT) scan of the heart that measures calcified plaque in the coronary arteries.

Talking to Dr. Fahsah the day of Jerry’s bypass surgery, Larry remembers the doctor saying his brother could have had a heart attack just walking in the hospital that morning. That’s how bad his blockages were at the time.

Family history is one of eight key links to heart disease. Attended a free class Feb. 25 to learn about all eight links and how they interact to affect your health.

Middle brother, David, 60, is learning from his brothers’ experiences.

David is working with Dr. Fahsah to improve his heart health by reducing his cholesterol and blood pressure through medication and lifestyle changes that include healthier eating and exercising more. He also attends cardiac rehabilitation, a monitored exercise program offered through Norton Heart & Vascular Institute.

“Like many, the King siblings are fighting an uncontrollable risk factor — family genes,” Dr. Fahsah said. “Other risk factors can be controlled. I can work with patients to quit smoking, improve their eating habits and lower their blood pressure or cholesterol. But there’s nothing we can do about family genetics, which is one of the biggest contributors to coronary artery disease.”

The brothers also encouraged their other siblings to get a checkup. They recently learned all but one has the signs of coronary artery disease.

“We also are talking to our children about heart disease,” Larry said. “They now realize they have the same genes as their dear ol’ dads when it comes to heart disease, and they are making changes.”