Lung cancer screening — a CT scan of the lungs — establishes a baseline, and annual follow-ups can provide early detection. 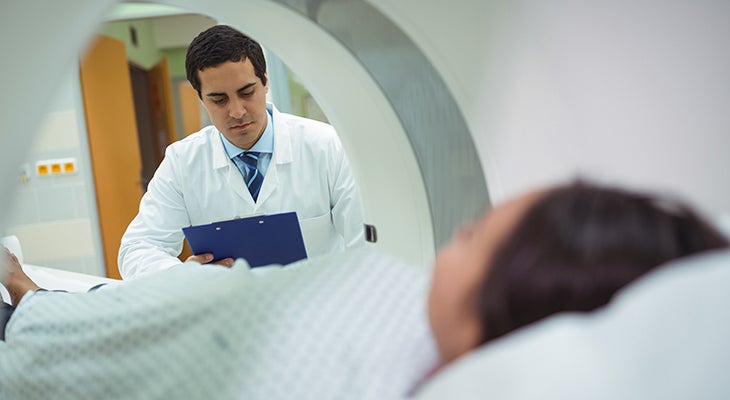 Nearly one in every thousand Kentuckians will be newly diagnosed with lung cancer this year — the worst rate in the nation — and most of those cases will be found after the cancer has spread, according to new data from the American Lung Association.

Kentucky’s rate of new lung cancer cases is 92.6 per 100,000 people. That’s down from last year’s rate, but just 18.8% of cases are caught early when they are more treatable.

Indiana isn’t much better. It ranks 44th among all states for the rate of new lung cancer diagnoses, with 21.3% diagnosed at an early stage, which is close to the national rate.

If lung cancer is caught before it spreads, the five-year survival rate is nearly 60%.

But lung cancer symptoms typically don’t show up that early, which is why periodic lung cancer screenings are a breakthrough for patients at risk.

A screening that uses high-speed, low-dose computed tomography (CT) scanning can detect even the tiniest tumors.

A baseline CT scan of the lungs is followed by annual follow-ups much like the mammogram routine recommended for many women. By comparing screenings over time, providers establish whether any changes mean more diagnostic tests are needed for follow-up.

Kentucky has one of the highest rates of lung cancer screening in the country, but even then, only 10.3% of those at high risk are being checked.

“This simple screening has the ability to completely shift the curve of how quickly we can diagnose lung cancer at early stages, when it is more treatable,” said George J. Mikos, M.D., thoracic surgeon with Norton Cardiothoracic Surgery. “Most patients with lung cancer were diagnosed at an advanced stage, when they started to show symptoms. These screenings are absolutely revolutionary.”

A CT scan of the lung is painless, noninvasive and fast. The scans are available at Norton Cancer Institute’s Comprehensive Lung Center for individuals at high risk for developing lung cancer. You may be a candidate if you are age 55 to 74 and are a current smoker or have a 30-pack-year smoking history. This means you smoked one pack a day for 30 years, or two packs a day for 15 years, etc.

You also may qualify for a screening if you have a family history of lung cancer or have signs or symptoms of lung cancer. Talk to your physician to determine if you should have a screening.

Most insurance companies cover the cost of a lung cancer screening. Medicare Part B also generally covers the screenings for those who meet the criteria above. A physician referral is required.

The center combines screening, diagnosis and treatment to make sure each patient has access to state-of-the-art lung cancer care and support services.

It also incorporates access to smoking cessation resources. Naturally, never smoking is the best health practice and largely helps prevent lung cancer, but for those who smoke and want to quit, help is available.