My 25 years in the kids’ emergency room

My 25 years in the kids’ emergency room 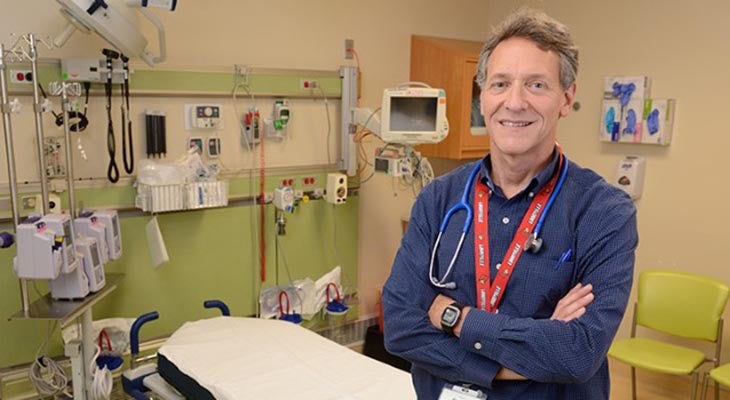 When Ron Paul, M.D., started as chief of pediatric emergency medicine at the children’s hospital and the University of Louisville School of Medicine in 1991, a solution of cocaine was used as a local anesthetic for repair of cuts. And 1991 wasn’t that long ago. At that time, kids were given only a shot of painkiller before a broken bone was repaired. Most of the hospital’s physicians were general pediatricians with no specific emergency training. Nurses were primarily there to take orders and make things happen. And notes were written by hand on carbon paper.

Fast-forward 25 years. The changes brought about under Dr. Paul’s leadership have transformed the way in which children in our community receive emergency medical care.

As he retires as chief of the department, we sat down to learn about some of the changes he has helped to bring about.

“We’ve really expanded what we can do to provide better, safer and more efficient care,” Dr. Paul said. “For instance, the medical community has a better understanding and recognition of pain in children and the need to treat that. It sounds barbaric, but as recent as 25 years ago, we would see kids moaning in pain from procedures.

“Now we have sedation, ultrasound-guided nerve blocks and better medications — and we know better how to use them.”

Dr. Paul highlighted several changes he’s witnessed over the years — some for the better, some for the worse:

–    Fewer burn patients thanks to more regulation in use of household smoke detectors and changes to the safety of cigarette lighters.–    Different diseases to worry about: Before it was Strep pneumonia and meningococcal meningitis and sepsis, but thanks to vaccines, these are much less common. Now the team worries about things like the threat of Zika and Ebola–    More children with complex medical needs: Modern medicine has helped more children survive congenital heart defects and critical health conditions that require ventilators, as well as live longer with chronic diseases such as cystic fibrosis. This also means their fragile health requires more emergency care.–    The family now stays in the treatment room for nearly everything. They used to be asked to leave for even small procedures.–    More children are victims of physical and sexual abuse, or at least a greater number are recognized and reported.–    While alcohol used to be the biggest “drug” problem, pediatric emergency medicine specialists now must contend with more children and teens experimenting with “designer” and street drugs, in addition to alcohol.–    Instead of automatically ordering multiple tests, such as X-rays, CT scans and lab work, pediatric emergency medicine specialists can draw on a large amount of research to help them diagnose with less testing. This can help reduce stress in an already scared child as well as reduce the amount of radiation exposure to the child.

The pediatric emergency medicine team is standing by 24 hours a day, seven days a week to help children when they need it most. The downtown children’s hospital is the only free-standing Level I Pediatric Trauma Center in Kentucky, which means that we serve as a regional resource capable of providing any level of care required for every aspect of an injury at any time of day. This includes orthopaedic surgery, neurosurgery, anesthesiology, emergency medicine, radiology, cardiac surgery, general pediatric surgery, critical care and more.

Find a pediatric emergency department near you.

Because the hospital’s pediatric emergency department treats more than 80,000 children each year — more than 200 kids each day — the team of caregivers has shifted over the years.

“We’re working at giving children a much better experience, and that includes having child life therapy as part of the team — something that’s essential in an emergency department,” Dr. Paul said. “They really help a child get through a procedure and stay calm. They allow us to use fewer sedation drugs and provide a better emergency experience for the entire family.”

“We used to use carbon paper in triplicate,” Dr. Paul said. “It was hard to get that third copy legible; you had to hope you could read the handwriting and you had to walk around hunting for the physical chart. Now you can read it, it’s always right there in the room and you have immediate access to exactly what you need. It can save critical time, especially in an emergency situation.”