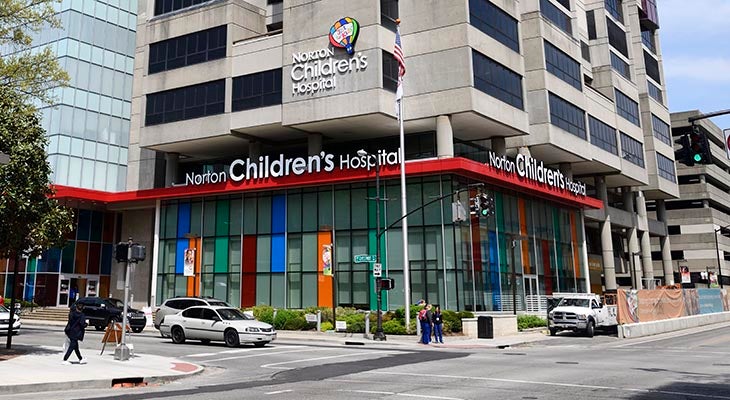 Norton Healthcare today announced that the downtown children’s hospital that it has owned and operated for nearly 50 years will now be named “Norton Children’s Hospital.” The first children’s hospital opened in Louisville nearly 125 years ago under the name of Children’s Free Hospital. Over the years, the name of the hospital has changed, but its mission has remained the same. Children are at the heart of what we do, and Norton Children’s Hospital will continue the work of caring for, healing and serving children and their families in this community.

“We’ve had several names for children’s services over the years, but our commitment to children has always been what drives us,” said Thomas D. Kmetz, division president of women’s and children’s services. “Years ago, the hospital was known as Norton-Children’s Hospital, and we were pleased to learn through our research that that name still resonates with the community.

“Our name may be changing, but the same caregivers and caring our patients and families have come to know and expect are still here, and will be for many years to come.”

The Norton Healthcare Board of Trustees selected the name Norton Children’s Hospital after several rounds of research involving the local community and surrounding areas, as well as Norton Healthcare employees.

“Children are first in what we do, and the research affirmed that Norton is a trusted, respected name in health care,” Kmetz said. “Since the children’s hospital has been part of the Norton organization for nearly 50 years, it made sense for it to bear that name.”

The new name will be used beginning Nov. 10, with a gradual change in all signage and other materials occurring by the end of the year.

When it was founded in 1890 by a group of women from Warren Memorial Presbyterian Church, Children’s Free Hospital was only the 10th children’s hospital in the country, and the first in the south. When the hospital officially opened its doors in 1892, it was a place where children could have safe surgery and a clean place to recover. With its faith-based founding, staff treated all children who needed medical care, while also working to improve the health conditions outside of the hospital.

Following a mutual decision in late June 2016 to end the naming rights agreement, Norton Healthcare and Norton Charities agreed that the name Norton would be removed from all Norton-owned facilities and medical practices.

“We thank Norton Charities and its members for their support and dedication to the Commonwealth’s children,” Kmetz said. “Both organizations remain committed to meeting children’s health care needs. We will now pursue that focus independently.”

In its history, the hospital has achieved many national, state and regional firsts. Among them, caregivers pioneered treatment for scoliosis completed the country’s second successful infant heart transplant developed the first programs for neonatal massage; created regional treatment programs for congenital heart disease; and established one of the largest plasmapheresis centers in the country. The hospital is nationally recognized for cystic fibrosis treatment, cancer care, nursing excellence, extracorporeal membrane oxygenation  (ECMO) and epilepsy treatment, to name a few.

The hospital also supports the Kentucky Regional Poison Control Center, which serves all counties in Kentucky.