A nasty elbow radial head fracture was supposed to end his football career, but this Trinity grad fought back and won 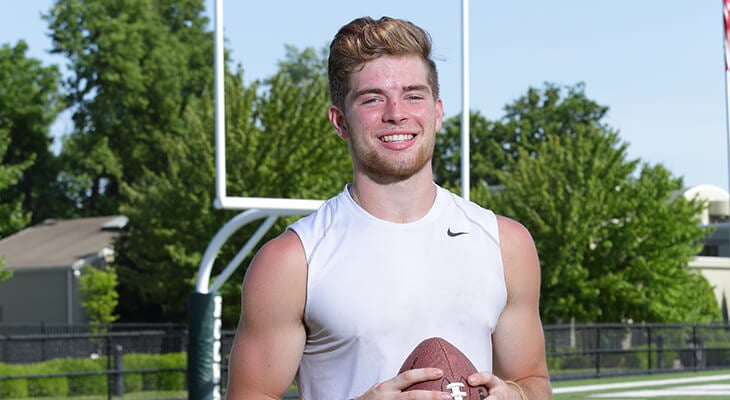 Noah Hoffman, 19, wants to be a king in football.

“My goal has always been to make it to the NFL,” Noah said.

At 6 feet 3 inches, 220 pounds, Noah was a star offensive lineman playing tight end at Trinity High School between 2013 and 2016. During those years, the Rocks went undefeated his senior year and were two-time state champions.

Division 2 and Division 3 schools heavily recruited Noah. For most high school athletes, these schools would be a great cap to their athletic career; however, Noah had his sights on the big leagues — Division 1 (D1).

To get closer to that goal, Noah signed on to Fullerton College near Los Angeles, a junior college with a winning record, including a national championship title in 2016. This meant Noah would be under the watchful eye of D1 recruiters during his freshman year.

A bad radial head fracture in his elbow

It seemed everything was working out according to his plans. Fullerton was undefeated during the 2017 season. Noah — the only true freshman starting for the Hornets — was in top shape. Then, during practice, a defensive back crashed into Noah as he went up for a pass. Noah ﬂipped in the air and extended his left arm to brace for impact.

The radial head fracture in his elbow was severe. His season was over, and he wondered if he’d ever play football again.

“There’s nothing scarier than having your 18-year-old son 2,000 miles away with a serious injury,” said Rhonda Hoffman, Noah’s mom.

Rhonda ﬂew to California, and the two met with specialists in Los Angeles. Noah’s elbow was not only fractured, but his bones were ﬂipped upside down. In unbearable pain, Noah needed surgery. However, Rhonda wanted Noah home for such a serious operation, and she needed a physician she trusted. She brought Noah to see Amit Gupta, M.D., orthopedic surgeon with Norton Louisville Arm & Hand.

Noah had surgery on Dec. 6, 2017. In addition to repairing the complex elbow fracture, Dr. Gupta had to correct compartment syndrome in Noah’s forearm, which is an increase in pressure caused by bleeding in the muscle.

“The severity of Noah’s injuries meant this would not be an easy road to recovery, but he had ﬁght in him,” Dr. Gupta said. “Nothing was going to slow him down or keep him from being his best. I just did my part to help him along his journey.”

One month after surgery, Dr. Gupta gave Noah the green light to return to Fullerton and start off-season conditioning. Soon, he was back on the ﬁeld. During that spring semester, D1 recruiters returned in search of new football stars. And one team had their eye on Noah.

In May, Noah committed to Ohio University with a full scholarship. He has joined the Bobcats for their 2018-19 season.

“I fell in love with the school and what they had to offer, not only as a football player but as a student,” Noah said.

Achieving this goal seemed impossible just a few months prior; however, Noah never gave up on his dream.

Louisville’s destination for arm and hand care. Make an appointment.

“When I did commit, it was truly an overwhelming experience because just ﬁve months before I was told football wasn’t a possibility for me anymore,” he said. “My dream has never changed though. I know this is the path God wants for me so I just stay humble and continue to work hard every day.”

For Rhonda, who was by Noah’s side through the valley and now the mountaintop, the experience has left her with immense pride for her son.

“Noah called me to say, ‘We did it!’ when he got his offer,” Rhonda said. “He has so many people cheering him on who have been on this journey with him.”