Mia Hamm inspires athletes to be resilient and empowered

Mia Hamm inspires athletes to be resilient and empowered 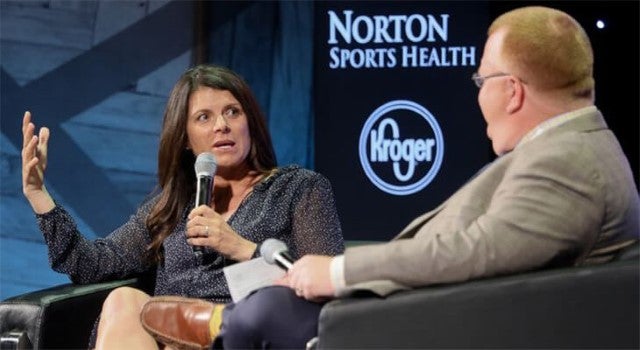 I was 14 when the 1999 FIFA Women’s World Cup, which included Mia Hamm, put the world on notice that female athletes could be an important part of the athletic culture.

I loved soccer. The 1999 women’s team empowered me to see sports in my future and know that as a female athlete, I was important.

Women no longer had to view sports as just a hobby; they could be lifelong passions that we could take as far as our athletic ability would allow us.

Hamm was keynote speaker at the 2017 Courier-Journal Sports Awards presented by Norton Sports Health. In her speech, she said she and her teammates had the future in mind.

“For our team … it wasn’t just about us. It was about moving the sport forward,” she said. “It was about those who would come after us — the young girls who would put on the national team jersey — and it was for the future.”

At 14, I didn’t think I could grasp that concept. But as I reflect back almost 18 years later, I believe that is why Hamm and her team have joined the other all-time greats to live on in so many hearts and minds. People could see it wasn’t just about them — it was about the future of their sport and, in so many ways, the future of female athletics.

I asked Hamm how she felt seeing the current U.S. Women’s National Team’s accomplishments regarding fair pay. She smiled. I could sense that she was proud.

“What they have accomplished is magnificent, and the fact that they are doing it for not just them but the future of the sport is what I believe helped them accomplish their goals,” Hamm said. “It wasn’t a selfish act; it was an act to move the sport forward at a time when they are extremely popular.”

These courageous acts, these moves to see a future, are something the 1999 Women’s World Cup team started. They created a culture of “us — not me — against the world.”

Through that selflessness, they empowered a new generation of young soccer players and athletes to set new goals. The goals sought to put women on an even playing field with their male counterparts. It is one of the many reasons participating in sports is so important for young women. Sports create a unique opportunity to be a part of a community that reaffirms we are better and stronger together.

Hamm joked that many young girls come up to her to say, “My mom or parents loved you.” But Hamm isn’t taking credit for the way she has affected those young girls and their futures, even if they never got to see her play. What she gave them they may not even fully understand, but it shines through in their triumphs.

There is a reason that soccer has one of the highest participation rates among women in the country. Along with her teammates, Hamm gave young girls like me a new fire and passion for playing sports. That is a gift we have been able to share with the next generation of young female athletes.