How one participant found her inspiration to join the 2018 Bike to Beat Cancer and how you can get started with training. 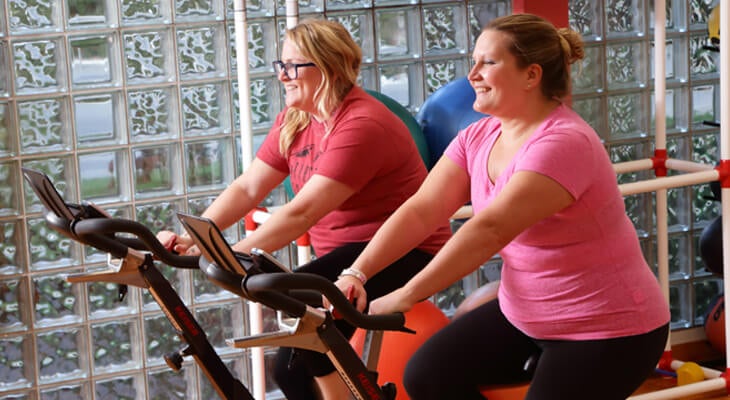 September 2018 will mark the 10th anniversary of Bike to Beat Cancer, a fundraising event to support cancer care in the Louisville area.

Last year, she formed “Team AYA” (Adolescent and Young Adult) and participated as a Bike to Beat Cancer spin rider — an option available for those who want to complete their miles on a spin bike instead of a road bike.

Morrison works with young adult cancer survivors. She formed the team to encourage them to get involved, get some exercise and help raise awareness. She clocked in 35 miles — a big accomplishment for a first-time rider.

Why Bike to Beat Cancer?

“I chose to ride in Bike to Beat Cancer for three reasons: The ﬁrst reason is the experience I had as a volunteer last year; the participants were so encouraging, enthusiastic, happy and supportive that I could not wait to sign up to ride the following year,” she said. “Riders would stop and tell me, ‘Oh, you can do this — this is my third year,’ or ‘This is my ﬁrst year and I’m doing the 65-mile ride.’ It amazed me how they were enjoying themselves.”

Morrison’s other two reasons were to inspire people to exercise and to honor her grandmother, a breast cancer survivor.

“I admire her,” she said. “She continues to battle the late effects of her breast cancer treatment and is unable to participate, so I participate for her.”

Morrison ﬁrst became acquainted with cycling after participating in a Norton Cancer Institute spin program last year. The event took place at an indoor cycling studio, where she began taking weekly classes. She eventually invited her Team AYA to train with her there.

“I really enjoyed completing 35 miles. However, I feel I am capable of more,” she said.

The Bike to Beat Cancer will be Sept. 8, 2018, at Norton Children’s Medical Center. In addition to the 35-, 65- and 100-mile options, riders also can choose a 15-mile ride option, making it easier for people of all cycling levels to participate. A 5-mile Family Ride will be available again, where adults and children can ride a fun and leisurely path together through Norton Commons.

The spin ride option also will be offered again. Rather than hitting the road, complete your mileage goal on a stationary bike located in a spin tent at the start/ﬁnish line. Local spin class instructors will lead the spin tent. You also can spin at home or in a gym.

Need more convincing to join community members and survivors for a great cause? There are plenty of reasons.

“Bike to Beat Cancer is important for several reasons: It gives us an opportunity to give back to an organization that is ﬁghting cancer daily, be in community with one another, have fun and enjoy life! What more could you ask for?” Morrison said.

Everyone knows someone who has been touched by cancer, and participating in Bike to Beat Cancer is a great way to honor them.

Join cyclists of all ages and abilities and begin training for the 2018 Bike to Beat Cancer in February! Spin classes are a great way to kick off your training and will be offered for a nominal donation from February to September at Louisville Athletic Club and local YMCAs. All training ride donations benefit Norton Cancer Institute.