Mary Cambron wanted to give back by raising money for those fighting cancer. She never imagined she would also gain a life partner. 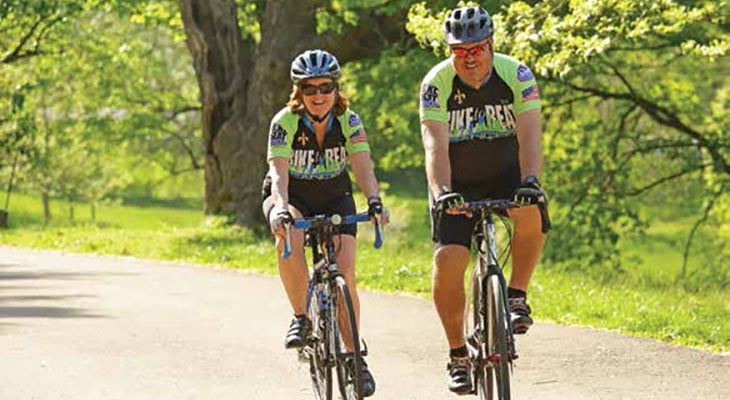 An unfortunate reality is that everyone has been touched by cancer in some way. Mary Cambron, pharmacy director for Norton Audubon Hospital and Norton Hospital, first faced cancer when the disease took the life of her cousin at age 15. Mary’s aunts, as well as a dear friend and co-worker, also have endured the disease.

When she made the decision to take on Bike to Beat Cancer’s 35-mile ride in 2013, she rode for those loved ones as well as others fighting cancer in our community. With every push and pull of the pedals, Mary thought of their strength. With every dollar raised, she hoped for a cure.

When Mary took on the athletic endeavor of a 35-mile bike ride, she did so with the intention of giving back. She never imagined she would gain a life partner in return. She and her future husband first crossed paths on Sept. 12, 2013, during a training ride.

For information about this year’s event, including how to participate or volunteer:

“Greg had lost his wife to cancer and was riding in her honor,” Mary said. “Bike to Beat Cancer is very near and dear to his heart, and he is very diligent about riding every year.”

In 2013, Mary and Greg started and finished the ride together, building a special bond as they honored loved ones taken too soon by cancer.

The following weekend, they went on their first date. The two were engaged in June 2014 and married in February 2015.

They continue to participate in Bike to Beat Cancer, year after year. The event holds a special place in their hearts because it’s where they not only honor their loved ones, but also celebrate their bond.

“We love to ride. It’s one of the things we really enjoy doing together,” Mary said. “The whole family gets involved. Our kids and in-laws join the crowd to cheer us on.”

Thus far, Mary and Greg have raised more than $20,000 to help support patients of Norton Cancer Institute and Norton Children’s Cancer Institute, affiliated with the UofL School of Medicine, and they challenge you to get involved!