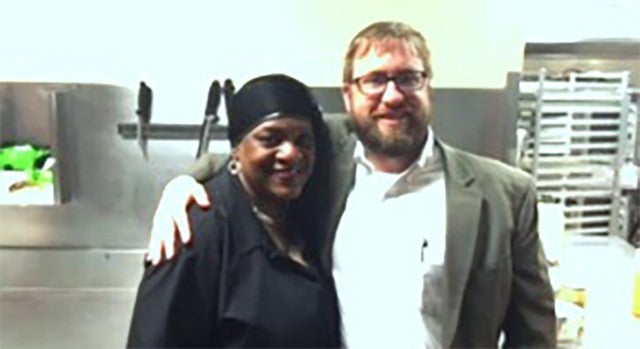 When Jonathan Presser, vice president of operations and finance for Norton Audubon Hospital, found out Norton Cancer Institute would partner with Churchill Downs for the 2017 Kentucky Oaks “Pink Out” festivities, he had an idea.

“I want to nominate my friend and co-worker Betty Beckham to walk in the Survivors Parade,” he thought.

Beckham had recently gotten the news that she’s winning her battle with breast cancer. After surgery, chemotherapy and radiation treatment, Beckham is doing well with the support and encouragement of family and friends, both in and out of work.

“I am so blessed. God has been good to me,” Beckham said. She praised all her caregivers and surgeons “true angels.”

Such a positive attitude comes as no surprise to Presser. He saw Beckham’s spirit shine through three years ago when his best friend, Jeff, had lung cancer.

For months Jeff had been in and out of Norton Audubon Hospital. It was during Jeff’s last stay that Presser and Beckham bonded over homemade chicken soup served up with a big helping of kindness.

According to Presser, food had been “no friend” to Jeff. One night, nothing on Jeff’s tray had been touched, yet he told Presser he was hungry and would love some chicken noodle soup.

Presser headed to the kitchen, where he found Beckham, who has been a cook with the hospital for 20 years. He wanted to see if she could fix Jeff a simple can of soup and even offered to go buy some at a nearby store.

Beckham had been finishing her shift and, with keys in hand, was ready to go home, but instead she stayed to make homemade chicken noodle soup for Presser’s friend. As she made the soup, the two talked about their work, their families and his friend, whose fight was nearing its end.

Presser has often reflected on that special time he and Beckham shared. So he could think of no one more deserving to walk in the Survivors Parade at Churchill Downs.

“I wanted to honor Betty’s values and courage, and show her my gratitude,” he said. “Also, if you knew my friend Jeff, you’d know he’ll be there in spirit because he’d never miss the opportunity to celebrate others.”

When word came that Beckham would indeed be walking in the Oaks Day parade, at first she thought she was in trouble.

“My boss told me I needed to go to administration,” she said. “I thought ‘Uh-oh, I’ve never been called to the office before.’”

What she found was not trouble, but lots of smiles and thank-you’s as she learned the exciting news. Presser told Beckham that since he did all the work to get her selected, he should be her date that day. She told him with a smile, “You’d best check with your wife on that.”