Once they read the girl’s adoption file, they believed she was meant to be their daughter. They decided to name her Victory for the obstacles she had overcome. 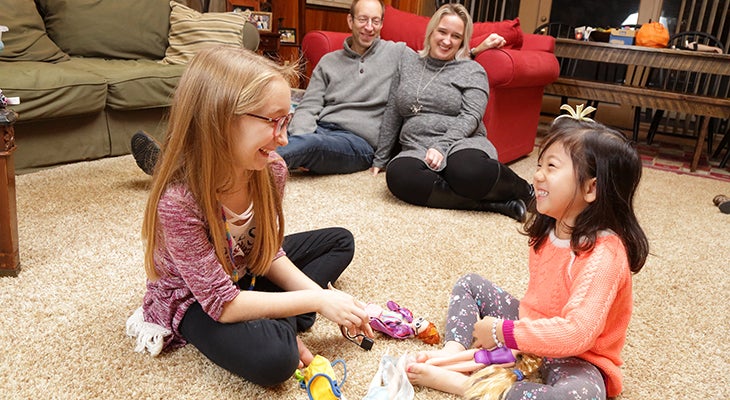 Since she was a child, Jenni Haynes, P.T., CLT, wanted to adopt a baby girl from overseas. That dream became reality in April 2018.

Jenni and her husband adopted a 2-year-old girl from China who had survived cancer as an infant. The girl’s right arm was amputated when she was 5 months old after she was diagnosed with infantile fibrosarcoma, a tumor that develops from cells that produce connective tissue.

Jenni, manager of the Lymphedema Program at Norton Cancer Institute – Brownsboro, and her husband were prepared to adopt a child with a medical need. Once they read the girl’s adoption file, they believed she was meant to be their daughter. They decided to name her Victory for the obstacles she had overcome.

Victory, now age 3, is thriving. She has developed strong bonds with Jenni’s two older children and enjoys playing with her friends at day care. Every six months, Victory undergoes scans that screen for cancer at Norton Children’s Cancer Institute, affiliated with the UofL School of Medicine. Doctors are monitoring enlarged lymph nodes pressing on her jugular vein, but the enlargement appears to be a reaction to allergies and not a sign of the cancer reoccurring, according to Jenni.

“As with raising any toddler, we have our challenges, but Victory has been such a blessing,” Jenni said. “In some ways, it feels like she has always been a part of our family.”

“I’m grateful that Norton Healthcare recognizes that some of its employees want to grow their family through adoption,” Jenni said. “They’re helping with something that is a need worldwide. There are so many children in the world who need a family.”