Can elephants teach us how to cure cancer? | Norton Healthcare Louisville, Ky.

Can elephants teach us how to cure cancer?

Can elephants teach us how to cure cancer? 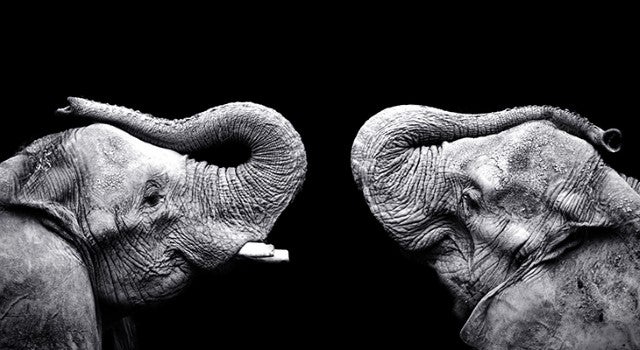 The number of African elephants living in the wild has plummeted from about 5 million at the turn of the 20th century to fewer than 450,000 — with around 111,000 lost in just the past decade. While elephants may be no match for habitat destruction or ivory poachers, they beat humankind hands (or feet) down when it comes to surviving disease. They rarely get cancer.

Experts estimate the rate of cancer among elephants to be less than 5 percent compared with 11 to 25 percent in people. Scientists have long been stumped as to why elephants show such remarkable resistance to cancer. A study published in the Journal of the American Medical Association may point to an answer to this puzzling mystery.

This collaborative study between the Huntsman Cancer Institute, Utah’s Hogle Zoo and Ringling Bros. Center for Conservation found that elephants have 38 modified copies of a protein called p53, which is well known for its cancer-inhibiting properties. In comparison, humans have only two genetic copies (alleles) of this cancer-suppressing protein.

It appears that through centuries of evolution elephants were able to develop a robust p53 mechanism that has become quite good at killing damaged cells. Joseph M. Flynn, D.O., MPH, executive director and physician-in-chief, Norton Cancer Institute, noted the significance of this is simple, yet profound.

“By definition, cancer is the uncontrolled division of abnormal cells in a part of the body,” Dr. Flynn said. “If your body has the power to kill an abnormal or damaged cell, it’s gone and no longer has the potential to become cancerous.”

To test this “kill switch,” researchers extracted white cells from blood drawn during routine wellness checks on a number of elephants. They subjected these extracted cells to radiation, which can damage DNA and trigger cancer. The cells reacted with a typical p53-mediated response. Essentially, they committed suicide.

Further support for p53’s role in destroying damaged cells before they can become cancerous came from looking at genes from patients who have an inherited form of cancer called Li-Fraumeni syndrome (LFS). Individuals with LFS are nearly the opposite of elephants. They have just one active copy of p53 and more than a 90 percent lifetime risk for cancer.

When the researches ran side-by-side tests in which they exposed cells from elephants, LFS patients and healthy individuals to radiation, the results were striking. The elephant cells self-destructed at five times the rate of LFS cells and twice the rate of healthy human cells.

“Beyond sharing a pretty cool fact about our largest four-legged mammal friends, this research may yield important information for those of us who walk around on two legs,” Dr. Flynn said.

What this study found supports research over the past three decades that has shown certain mutations in p53 protein help the immune system target tumor cells. Immunotherapy — a form of targeted therapy recently in the news for its success in treating former President Jimmy Carter — is creating tremendous interest in the body’s ability to use its own natural defense system to fight cancer.

Immunotherapy clinical trials, such as those happening as part of a robust research program at Norton Cancer Institute, are leading to impressive cancer treatment breakthroughs. Many experts believe this type of research holds the promise of curing cancer, or at least shifting it to a manageable chronic illness.

Unfortunately, only about 5 percent of cancer patients who could benefit from participating in a clinical trial sign up for one.

“We need to make it common for patients to ask, ‘What trials do you have for me?’” Dr. Flynn said. “If learning more about elephants can help people see how research moves medicine forward, that’s a good thing.”

If you are interested in learning more about clinical research trials at Norton Healthcare, call (502) 629-3449.