Norton Audubon Hospital was known as St. Joseph Infirmary when Cecilia Heitkamper began working there in 1968. 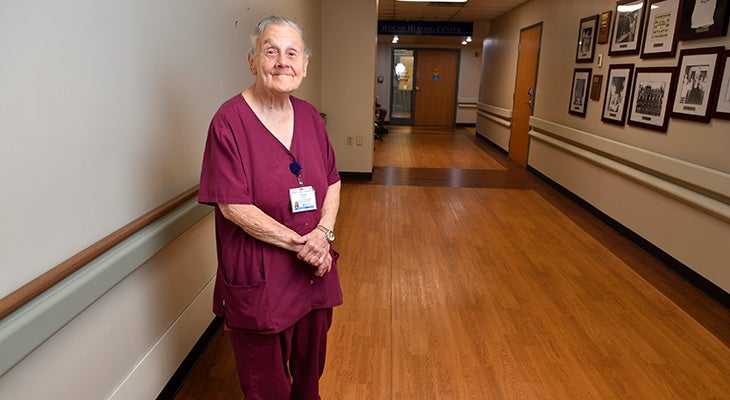 Norton Audubon Hospital has evolved over the decades, called by different names and providing care at various sites in Louisville, but one woman has remained constant.

Last year, Cecilia Heitkamper, environmental associate, marked her 50th year at the hospital, which was known as St. Joseph Infirmary when she began working there in 1968. A for-profit company later purchased the hospital, which stood at Eastern Parkway and Preston Street, and built a new facility on Poplar Level Road that eventually became Norton Audubon Hospital.

Despite her impressive half-century at the hospital, with all the changes she has seen it undergo, the hardworking Cecilia is matter-of-fact about her tenure.

“The years go by fast,” she said with a wry smile. “I never felt the need to look for a different job. If you like something, why change? We have great supervisors here, and I like the people I work with.”

Cecilia, 82, rides a TARC bus to work, arriving just outside the modern, shiny new facade of the hospital.

Her duties involve cleaning the sleep center, endoscopy suite, offices and bathrooms in the hospital’s lower level. It’s a job she enjoys doing and takes pride in.

Cecilia has no plans to slow down anytime soon.

“I’ll go until I can’t go anymore,” she said. “When I get up in the morning, I thank God for giving me another day. I ask him to give me the strength to see the day through, and he always does. No matter how it turns out, I always come out on top.”

Sheri has known Cecilia since she started working at the hospital 35 years ago. Cecilia typically handles housekeeping duties on Norton Audubon Hospital’s lower level, but, according to Sheri, it’s not uncommon to see Cecilia support other areas of the hospital at a moment’s notice. According to Sheri, Cecilia is versatile and always ready to help.

“For me, it’s not Audubon without Ms. Cecilia,” Sheri said. “She is so dependable. Similar to the cornerstone of a building, she’s sturdy and can withstand so much.”

“Cecilia always shows up to do a good job,” Eric said. “Her work ethic is a great example, especially for the younger generation. Everyone knows her and looks out for her in case she needs anything.”