Trouble getting around? Don’t confuse cervical myelopathy symptoms with aging

Trouble getting around? Don’t confuse cervical myelopathy symptoms with aging 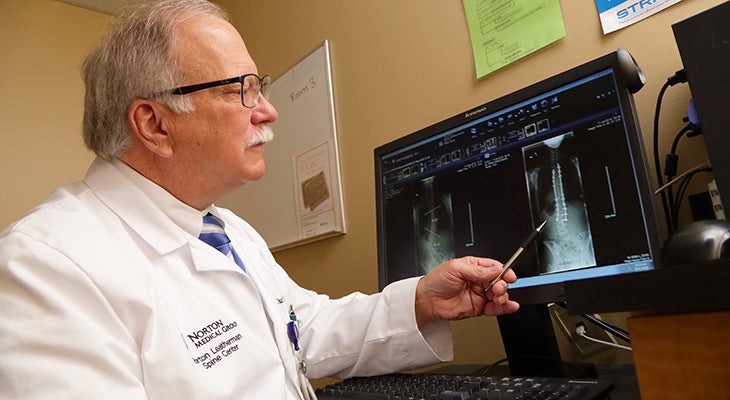 74-year-old Rodger First started having trouble getting around, he assumed it was just a part of getting older. For months, he struggled on uneven surfaces.

As Rodger’s condition worsened, he developed numbness and tingling in both arms and legs. Then, he suddenly couldn’t raise his arms to feed himself and could no longer write or walk. Next came the severe pain in his neck.

“It progressed very quickly,” Rodger said. “I couldn’t believe it.”

But Rodger’s symptoms weren’t something to ignore. Something serious was happening to his spinal cord.

“I remember when I was at the doctor, I couldn’t even stand up,” Rodger said.

Norton Leatherman Spine in Louisville and Southern Indiana offers world-class care from surgeons who are recognized nationally and internationally for their innovation, expertise and skill.

The cause was pressure on the spinal cord within the vertebrae in Rodger’s neck.

“We found narrowing behind his neck bones in the tube that his spinal cord passes resulting in severe pressure on his spinal cord, causing paralysis in his arms and legs,” Dr. Dimar said.

“It means that degeneration of the cervical discs causes narrowing of the spinal canal behind the neck that is so severe that the spinal cord is crushed — and stops transmitting signals from your brain to your four extremities that allow you to walk and feel,” Dr. Dimar said.

Because Rodger’s condition was quickly progressing, physicians rushed him into surgery, concerned that if they waited, he’d become paralyzed within 24 to 48 hours.

A surgical procedure called laminoplasty, which does not fuse the spine, freed space to relieve pressure on Rodger’s spinal cord. Dr. Dimar inserted a small plate to widen the spinal canal’s diameter.

When Rodger came out of the anesthesia, his severe neck pain had subsided. He eventually began to walk and feed himself again.

“I feel like I got my life back — I love to work in my yard and spend time with my grandkids, and now I’m able to do all of that again,” Rodger said.

According to Dr. Dimar, cervical myelopathy is not an uncommon condition.

“We see about 10 to 15 people come in every day with compression of the spinal cord or nerves in their spine ,” Dr. Dimar said. “Not every case is as severe as Rodger’s, but people should know that they need to seek help immediately if they develop any weakness or numbness and that they don’t have to live with pain — it’s not a normal part of the aging process and can be fixed.”