Discovering hope in the rubble of the World Trade Center

Discovering hope in the rubble of the World Trade Center

Two weeks in New York clarified and fortified a simple commitment—to go and to help when I can, and to live with the hope that others will come if I find myself buried under life’s rubble. 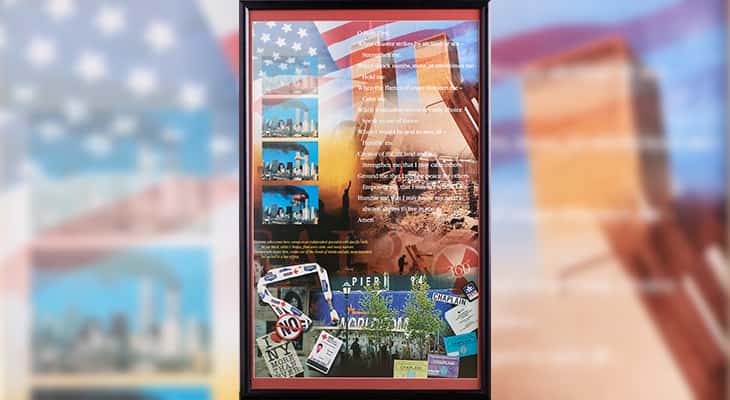 Twenty years ago, our nation was shaken to the core by the attacks carried out on September 11, 2001. Many will never forget where they were or what they were doing when news broke of what had happened in New York; Washington, D.C.; and Shanksville, Pennsylvania. A desire to help brought the Rev. Ronald C. Oliver, Ph.D., BCC, Norton Healthcare system vice president for mission and outreach, to Ground Zero as part of the American Red Cross Spiritual Care Aviation Incident Response (SAIR) team. In Ron’s 2002 essay, “360° of Radioactive Grief,” he shared an inside look at the emotions experienced in the days following 9/11.

I boarded the plane for New York clutching the telephone number that would connect me with the next set of instructions for this odyssey. Taking stock of myself, I held on to the hope that my twelve years as a chaplain in a pediatric trauma center would certainly qualify me for the “emotional preparedness A-team.” A little more than a day later, but less than three hours into my assignment as the Family Assistance Center (FAC) Red Cross chaplain coordinator, I heard my own quiet but anxious voice, “I’m in trouble.” I could already sense that every emotional resource and defense I brought to this place would be challenged and possibly even overrun by the omnipresent barrage of pain and need.

The FAC, located in the structure on pier 94, was expansive. Typically used for convention business, the pier had been commandeered by the City of New York and converted into a womb of resources and care for individuals who had lost family members, jobs, and housing. To illustrate the scope, in just one half of one of the three wings, there were over 136 convention-style booths in use. In addition to the many and varied helping organizations using the facility, there were two cafeterias, a childcare center, interpreters, an office supply center, a Ground Zero staging area, and dozens of fax and copy machines. The convention-style design did not disguise what this was really like—a hospital waiting room, albeit one the size of three football fields.

However, unlike a hospital setting where most people actually celebrate good news, these chairs and aisles and tables and lines were filled with suffering people pushing on without that hope. It was the absence of the potential for celebration that cast a pall that permeated the place. The pain was so dense and intense that just being there, walking to the bathroom, or eating in the cafeteria meant that it would seep into one’s being. This grief was like walking through a field of radioactive debris—just being around it meant that you were going to be affected.

While we were cognizant of the obvious needs, what took its toll on me and many of my chaplain colleagues was the awareness that we had no awareness as to what circumstance or what chance encounter would present a story so bizarre and unpredictable that there was no way to be prepared for it:

A mother said to a chaplain, “I am so grateful.” The chaplain, anticipating good news, opened herself up to take it in. The mother continued, “They called me yesterday and told me that they had found my son’s foot.” Grateful for a foot? Whoever could have imagined praying that prayer of thanks?

A lawyer, while filling out a man’s expedited death certificate, said to his widow, “I’ll record his date of death as 9/11.” From the mother’s side a little girl looked at the lawyer and asked, “You mean my daddy’s dead?” The question devastated the lawyer. She didn’t know what to say or do. In anxious desperation, she sought a chaplain.

A chaplain noticed her ex-husband’s wife sitting with a group around a table. Their amicable relationship allowed for an initiative by the chaplain. Moments into the conversation she learned that her ex-husband had died in the collapsing towers. A strange and unwelcomed feeling overtook her. Dazed, she called it a night and headed home.

The Ground Zero site visit had gone well enough. No one collapsed. No one was hurt. Seemingly it had been meaningful for many. As I walked away from the staging area, I let out a “Whew”— an outward signal to lower whatever had been needed to enable me to stand with fifty or more people whose world had just buckled some more. Spontaneously, I turned to face a Red Cross mental health colleague. Tears began to stream down her cheeks. She was able to name her pain, “I’ve got kids. I can’t do this. …” We stood in the aisle, crying, both of us trying to find something that would help us make it through the balance of the day.

As I lay in bed beside my eight-year-old son on the night before I left for New York, he registered his opinion about my going. “Please don’t go, Dad. Why do you have to go?” I told him that I was going because I hoped that I could do something for people who needed help, and I held out this hope, “Nelson, if we ever need help, they’ll come and help us. That’s what we do for one another.” His quick, unequivocal response gave me the bit of the blessing that I needed. “Okay,” he said, and with that he turned over to go to sleep.

My two weeks in New York clarified and fortified that simple commitment I shared with my son—to go and to help when I can, and to live with the hope that others will come if I find myself buried under life’s rubble. For me, right now, this is what the being meaningfully connected to others is about—and in the debris of 9/11, it is so much clearer.

Rev. Oliver is system vice president for mission and outreach at Norton Healthcare.