His parents supported him from the crowd for years. Now he rides for them. 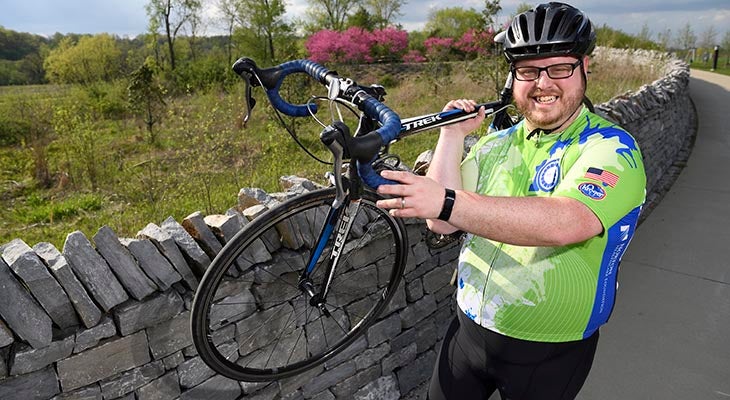 Seth Thomas, financial counselor, Norton Brownsboro Hospital, has been riding in Bike to Beat Cancer since 2009. Back then, the event was a 150-mile ride from Louisville to Lexington — a big feat for someone who hadn’t been on a bike since childhood. He was doing it for friends and family members who’d battled cancer, and that was his motivation to make it through.

He found additional strength in people he met during training rides.

“I remember one guy, Bob, who’d gone through cancer,” Seth said. “After all he’d been through, he was so effortlessly tackling these hills I would struggle with. He became a role model for me.”

Seth finished that first ride with his biggest cheerleaders standing by — his parents.

“While my mom thought I was kind of crazy for trying to bike so far, she and my dad were really proud of me, because I’m a big guy, and that was by far the biggest athletic feat I’d ever accomplished.”

They continued to support him — familiar faces from the crowd cheering him on with pride — as he rode year after year.

While Seth rode for those touched by cancer, he never imagined it would hit so close to home, but in 2011, it did. That year brought a devastating cancer diagnosis for his mother and a whole new meaning behind Seth’s purpose for riding.

Get more information about this year’s event, including how to participate or volunteer.

Seth created the team “Martha’s Squad” in honor of his mother, and members wore matching jerseys emblazoned with the team name. Martha’s Squad completed the ride together for an emotional finish that his mother made sure she was there to witness.

“Teams usually get split up as people ride at different speeds, but throughout our 100-mile ride, our team stuck together and crossed that finish line in unison,” Seth said. “The whole squad sporting my mom’s name. That was really meaningful.”

In 2012, Seth spotted his mother’s proud face, cheering him on again as he took on Bike to Beat Cancer for a fourth time.

It was in 2013 that an emptiness in the crowd weighed heavily on his heart. His mother, his cheerleader, his proud supporter, passed away about four months before the big ride.

2018 brought more heartache for Seth when his father, Tucker, a former Norton Healthcare employee and his other unwavering cycling supporter, passed away. With every pedal at Bike to Beat Cancer, he thinks of his parents. They are why he rides.

As Bike to Beat Cancer celebrated its 10th anniversary in 2018, Seth made it his mission to raise enough money to honor his parents with their names on a plaque displayed at Norton Cancer Institute – Brownsboro.

Since he first hopped back on a bike in 2009, Seth has raised nearly $25,000 to help patients battling cancer at Norton Cancer Institute and Norton Children’s Cancer Institute, affiliated with the University of Louisville. He doesn’t plan to stop anytime soon.

“I’ll continue to ride in Bike to Beat Cancer until I physically can’t or until cancer is cured,” Seth said.