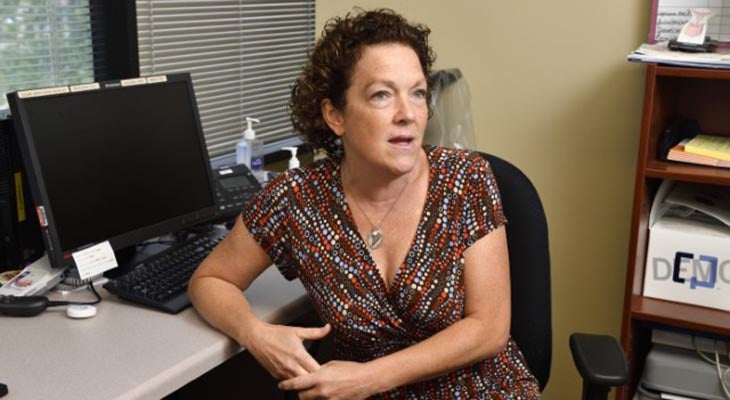 On becoming a parent: “No matter how wide your lens has been in the past, all of a sudden now it just redefines who you are in every way.” – Susan Hagan, M.D.

Dr. Hagan wasn’t always convinced she was cut out to be a physician.

“Medicine was a late decision for me. I graduated from undergraduate with a degree in philosophy and Russian language. Not sure exactly what I was going to do with that! So I got out of school and worked for a while in restaurant management of all things and liked it but then had always thought about trying to get into med school. At that point I didn’t think that was doable because although I had always done well in school I kind of felt like medical school was out of reach for me. But then I just decided, ‘You know what, I’m going to go back to school and give it a try.’

While in med school I thought I’d get into family practice. But during my third year when you start doing clinical rotations, my second rotation was OB/GYN. After my first delivery I was hooked. I knew that was what I wanted to do.”

Sometimes bringing a child into the world takes a village

“I was taking care of a Somalian patient who had been laboring for what seemed like days and was not getting anywhere. She really needed to have a cesarean section but, in her culture, that was a big move to make. The patient was very apprehensive, and after three or four hours of trying to convince her to do it, she was still saying no.

Usually when you tell a mom their baby could die, that’s all they need to hear — but with that particular patient that didn’t work.

‘If my baby doesn’t come out vaginally safely, then Allah will take care of it, and I’m OK.’

Luckily, she happened to have a sister-in-law who came in whom I had delivered her baby about six months previously. She recognized me and we greeted each other with a big hug. And that was all it took.

She told her, ‘This is Dr. Susan and she will take good care of you. If this is what she says you need, then this is what you need.’

And so in 10 minutes it was done and the patient agreed to a c-section. It was a happy ending for mom and baby.”

On her own struggle to become a mother

“My husband and I were in residency together, and we thought it was a good time to try and get pregnant. So you kind of assume that is just going to happen. Well a year later we still weren’t pregnant. We realized we were not going to be able to get pregnant without some pretty significant help.

We worked with some awesome doctors who were able to help us. But going through 16 months of trying and failing and wondering what the heck is wrong with us, it was a lot to deal with. Thinking that it may never happen so what are we going to do if we’ve always had this dream of having a family and now we’re not? What do we do with that?

Luckily for us we were able to achieve pregnancy three different times, and with the first ones being twins we ended up with four beautiful children. With going through trying to get pregnant, and then a twin pregnancy, bed rest for 15 weeks, and then newborns in the neonatal intensive care unit for four weeks, it gave me a lot of situations that I can now relate to with patients.”

Are you a Norton Healthcare employee or work with a remarkable colleague? We want to hear from you as part of our “Faces of Norton” series. Email us at info@nortonhealthcare.org.