For Dr. Cyna Khalily, orthopedics and Bruce Lee have a connection

For Dr. Cyna Khalily, orthopedics and Bruce Lee have a connection

He started doing karate at 15; now he runs his own school 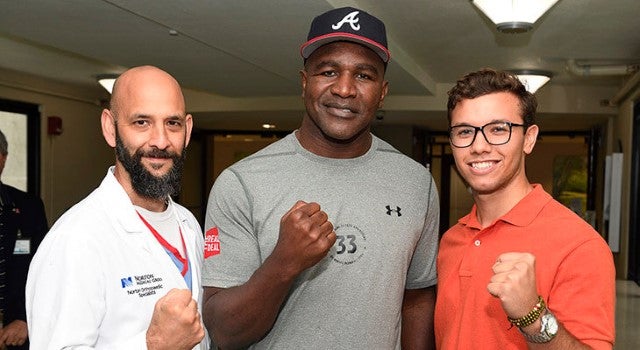 Old school rap and classic rock lightly echo around the walls of the operating room where Cyna Khalily, M.D., scrubs in to help a patient return to an active lifestyle. As the medical director of orthopedics at Norton Hospital, Dr. Khalily stays busy in the O.R. and in his practice as he works to heal patients through minimally invasive surgery. When he’s not in scrubs, he acts as a liaison between the medical and executive staffs of Norton Healthcare, working to establish and drive a policy centered on quality.

“If the water’s not boiling, it’s getting colder.” Dr. Khalily insists on never being satisfied. He also promises that, “The best thing to do is steal.” Steal the best medical techniques, that is. Dr. Khalily is always looking to learn new methods to drive orthopedic innovation at Norton Healthcare.

Growing up, Dr. Khalily was influenced by his mother, father and sister, all of whom are doctors. He became interested in orthopedics after a shoulder injury when he was younger. Dr. Khalily attended medical school at the University of Cincinnati, then worked at Good Samaritan Hospital in Cincinnati and the Missouri Bone and Joint Center in St. Louis before completing his residency at the University of Louisville. He currently specializes in surgical procedures involving the hips, knees and shoulders.

Bruce Lee inspired Dr. Khalily to pick up karate at the age of 15. During one session, he managed to break his own leg through admittedly bad technique. Luckily, he happened to know some orthopedic surgeons who helped him get back on his feet. He now has a black belt and runs his own karate school for adults. Dr. Khalily’s love of karate has inspired him to embark on a yearly trip to Japan and to learn Japanese. He also speaks Farsi, the official language of Iran. His family is Iranian and his parents commonly spoke the language around the house. Dr. Khalily is a proponent of learning many languages; he argues that it helps one to better understand other cultures.

Dr. Khalily’s one health tip is to take ownership of your own health by following doctors’ instructions and staying active.