When Francisco arrived in Louisville, one of the first recommendations he got was to find a job — any job — at Norton Healthcare. 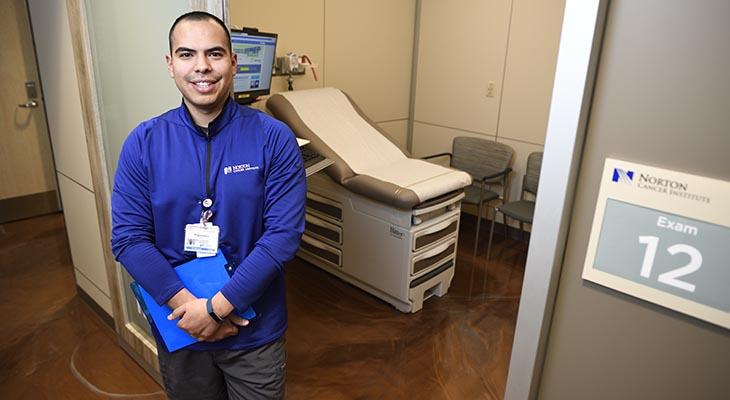 Eight years ago, Francisco Bravo lived in a small town near Guadalajara, Mexico. He recently had earned a bachelor’s degree in nutrition and aspired one day to work in a hospital as a nutritionist. Soon after graduating, Francisco left his home in Mexico to start a new life in the United States.

With a limited ability to speak English, he often had to learn on his feet as he settled in an unfamiliar land. When Francisco arrived in Louisville, one of the first recommendations he got was to find a job — any job — at Norton Healthcare.

Francisco jumped at the opportunity to wash dishes at the Norton Audubon Hospital cafeteria and has been on the move ever since. After a few months of hard work, Francisco began working as cook.

“It was a lot of fun working in the kitchen, and I learned a lot. All the while my English continued to improve, and before long I had another opportunity to try something new,” Francisco said.

Seeking to become more involved in clinical work, Francisco began working as a transporter. After discovering the joy he found in helping to care for patients, he was determined to continue on this path. Before long, his determination led him to improve his education. Francisco trained to become a certified medical assistant.

“I learned how to give injections, how to check blood pressure, working with the labs, and ultimately I earned my certification and began working at Norton Cancer Institute – Brownsboro. I’ve come a long way,” Francisco said.

Francisco didn’t waste any time before finding the next way to better himself.

“It was really hard on me starting out and not being able to understand the language. In my new role, I noticed a lot of Spanish-speaking patients having some of the same struggles that I had experienced, and I wanted to do something to help” Francisco said.

A culture of inclusion

Norton Healthcare celebrates the diverse backgrounds, characteristics and skills inherent in every person to help us live our values, meet our organizational goals and provide the best possible care to those we serve.

With the support of his manager, Francisco completed a certified medical interpreter course.

Dealing with health issues can be difficult enough as it is. When you factor in a language gap as well, the challenges may seem insurmountable. That’s where people like Francisco step in. They do everything they can to prevent language from being a barrier to receiving quality health care.

“I’ve been in that position before, just smiling and not being able to speak back. Now I’m the one who gets to bridge that gap and make sure that they’re not left in the dark,” Francisco said.

Francisco’s wife, Carolina Mendoza, is also a Norton Healthcare employee, working as a respiratory therapist at Norton Audubon Hospital. She too is a certified medical interpreter. Outside of work, they enjoy spending time together at home with their 6-year-old son and 2-year-old daughter.

Next on Francisco’s list is an associate degree to become either a nurse or an X-ray technologist. He is also in the process of applying for U.S. citizenship.

“I’m thankful that Norton Healthcare has allowed me to continue growing within the company,” Francisco said. “On top of that, having opportunities to help others as I’ve grown myself has been incredible.”