Gearing up for Bike to Beat Cancer, physician reflects on 9/11 Pentagon experience

Gearing up for Bike to Beat Cancer, physician reflects on 9/11 Pentagon experience 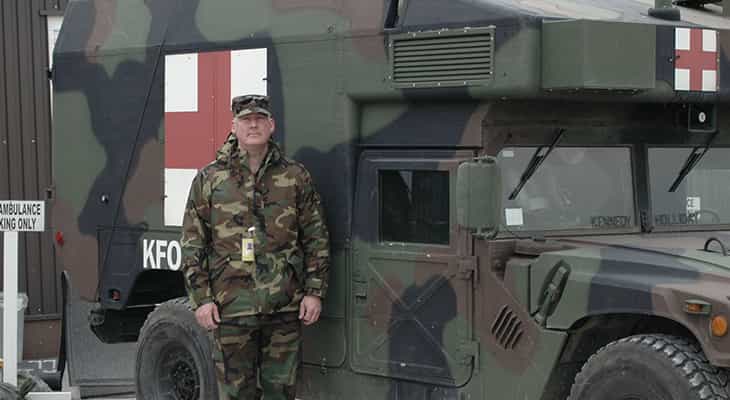 Sept. 11, 2001, is remembered as a day that brought great tragedy and heartache for our country. It’s also remembered as a day that brought heroic actions and great unity. That’s what Joseph M. Flynn, D.O., MPH, FACP, chief administrative officer, Norton Medical Group, and physician-in-chief, Norton Cancer Institute, remembers most about that day.

Dr. Flynn was serving as an Army physician near the nation’s capital. Stationed at Walter Reed National Military Medical Center, he was deployed to the nearby Pentagon after one of the hijacked planes was crashed into the building.

While dropping his kids off at camp, he’d heard on the car radio the news of the first two hijacked flights crashing into the twin towers of the World Trade Center in New York City. He didn’t expect tragedy to strike again — and so close to home.

“During my time stationed in D.C., we were all prepared to get deployed someplace, but never thought it would happen right where we lived,” Dr. Flynn said.

He assisted with triage efforts, and among the devastation and destruction — what stands out most about that day for Dr. Flynn is the good.

Make an impact for Norton Cancer Institute through Bike to Beat Cancer; consider riding or volunteering.

“I’ll never forget this little lady with a food cart,” he said.  “She said, ‘I live alone and thought I had to do something to help, so I’m delivering sandwiches.’”

That woman’s kindness moved Dr. Flynn, because her actions highlighted humanity’s inherent nature of coming together during times of great need. The firefighters, police officers and military servicemembers, among other heroes, are remembered for their bravery surrounding 9/11, but there were helpers of all kinds — doing anything they could, just like the woman delivering sandwiches.

Coming together to fight cancer

That’s what Dr. Flynn loves about Bike to Beat Cancer, which benefits Norton Cancer Institute. It’s an event in which a community comes together to help those in need — to fight cancer.

“Bike to Beat Cancer is about volunteerism and togetherness, and that’s what I saw that day at the Pentagon,” Dr. Flynn said.

When Dr. Flynn’s career led him to Norton Healthcare in 2015, he began riding in Bike to Beat Cancer. He’s ridden every year since.

He rides in honor of his loved ones and patients who have been touched by cancer.

“My mom died of leukemia,” Dr. Flynn said. “That’s why I went into cancer care.”

His father and sister also have cancer.

“This is a very personal journey for me.  My sister and father are truly heroic.  My sister continues to give to others impacted by bladder cancer and it inspires me,” he said.

This year’s Bike to Beat Cancer will be held on Saturday, Sept. 11, at Norton Cancer Institute- Brownsboro.

As Dr. Flynn pushes through 35 miles, he’ll be thinking of his mother, his father and his sister, as well as his patients, and reflecting on that Tuesday morning 20 years ago when he was called to help victims of the Pentagon attack.

The inspiring actions of those on Sept. 11 are similar in so many ways to the response by my colleagues at Norton Healthcare to the COVID-19 pandemic — also a tragedy in which people of all walks of life have banded together to help. Dr. Flynn will also reflect on that as he rides.