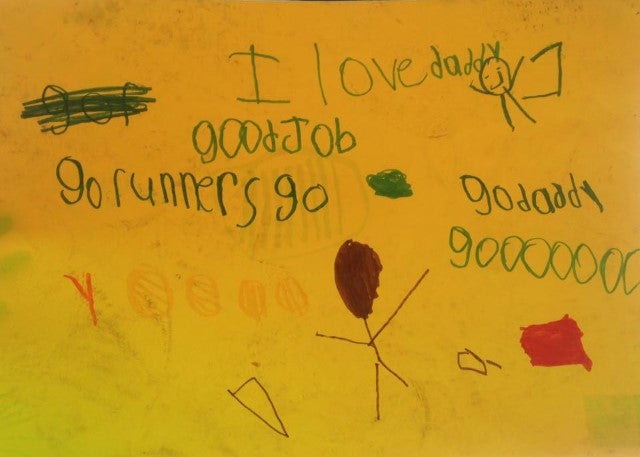 The last meal I ate before the birth of our first child consisted of a jar of queso dip and a dessert called Oreo cheesecake cupcake serenity. Those food items, however scrumptious, were not out of celebration or anxiety. They were pretty much the norm.

The next day, our son was born. And that’s where this story starts.

This is not a journey of extreme weight loss, a fitness guide for parents, or a long and winding trip from the dark side. My story is about fatherhood giving me a reason to be me.

On the day my son was born, I tipped the scale at over 200 pounds. I would have never told anyone I was overweight, but the chart at my doctor’s office said I was nearly 20 pounds heavier than my ideal weight.

But then my kids created a little conduit — asecret passageway — between my actions and their heart, a connection that intertwines my life with the future of theirs.

My role in the world had changed. I was now someone’s father, someone’s role model for the rest of their life. A question gnawed at me, “What kind of father, what kind of person, would my children see?”

When my son was born, I wasn’t new to the world of healthy habits. I liked to run. I played varsity sports in high school and, often to the detriment of my schoolwork, I was a gym rat in college.

My first post-fatherhood run lasted a quarter of a mile. My legs were heavy. I told myself I could make it a few more minutes, but the heaviness of each breath finally forced my ego to back down. I walked a couple shame-filled minutes and went home to my newborn. That question was now, quite literally, weighing on me.

What kind of father would my children see?

Later that year, I signed up for my first 10k race. Between early morning feedings and nights of colic-induced tears, somehow I trained for and finished the race.

With the support of my wife, I signed up for my first half-marathon the next year. I found reasons to include my children in exercise. I started reading food labels and watched my son watch me sweat in front of the television. Breathing became easier. Running actually became fun. My weight was no longer a hidden shame.

I was finally answering the question. I became a father who makes goals and achieves them. I run, hike, lift and play. I make dinner for the family. I wrestle with my kids. I am the superhero to their villains. I carry them through the store. I race down the street and dance with them in the living room.

This past weekend, I ran my second full marathon. Somewhere around mile 19 of the doggedly tough 26.2, I longed for my wife and children. Each step brought me closer to seeing them at the finish line.

With 200 yards to go and my family in sight, my oldest son dropped his “Go Daddy Go” sign and held my hand through the end.

Don’t get me wrong, there will still be days of queso dip and chocolaty desserts in my future. But now the scale tips more in favor of healthy habits that include my children — thanks to my children.

Looking for a fun way to get the whole family involved in healthy habits, sign for Fruit & Boot Camp. Two dates available in July. Free.