Micheal White shares his story of lung cancer treatment at Norton Cancer Institute and why his wife is his hero. 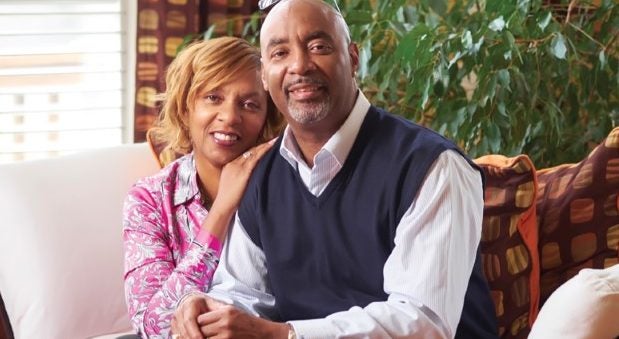 In May 2015, Micheal White, severely short of breath, rushed to the emergency room at Norton Brownsboro Hospital. Chest X-rays revealed fluid in his lungs. He was hospitalized overnight so doctors could monitor him and run more tests.

The next day, Micheal got the earth-shattering news: He had stage 4 lung cancer. A chaplain came to his room. Micheal remembers the scene like it was yesterday.

“We prayed and I turned it over to God,” the 51-year-old businessman and philanthropist said. “We have to look for the blessings in the adversity that God allows us to have. It’s how we react to that adversity that really counts.”

Micheal speaks from experience. In his 20s, he was a drug addict and alcoholic. At one time, he was seven years behind in his child support. Twenty years ago, he hit rock bottom with the help of a crack pipe and a can of beer.

“I wanted to die,” he said. But something in him refused to give up. He asked God to help him to get sober and become a responsible, caring father to his three daughters. And he succeeded!

Micheal started several businesses in the West End of Louisville, where he grew up, and hired recovering alcoholics and addicts to work for him. He also co-founded halfway houses for sober living in the West End where, he said, there is a scourge of widespread crime and addiction.

Grateful for his own second chances, Micheal also is a 15-year member of the 100 Black Men of Louisville, where he works with youth in need of mentors.

He also is grateful to the physicians and staff of Norton Cancer Institute – Brownsboro, where he received five rounds of chemotherapy. To mark his final treatment in September, Micheal asked Mayor Greg Fischer to sign a proclamation honoring “Mike’s Angels” — the name he gave Norton Cancer Institute staff who cared for him during his treatments. His friend, former University of Kentucky basketball star Derek Anderson, stopped by for the recognition ceremony. Also in attendance was Micheal’s wife, Latanya.

“Latanya has been very patient and understanding,” he said. She’s a wonderful woman and is my amazing angel.

Micheal said adversity has taught him to be more tolerant and patient, and that addicts and alcoholics, like cancer patients, deserve empathy, compassion and support.

“We should have a more level playing field,” he said.