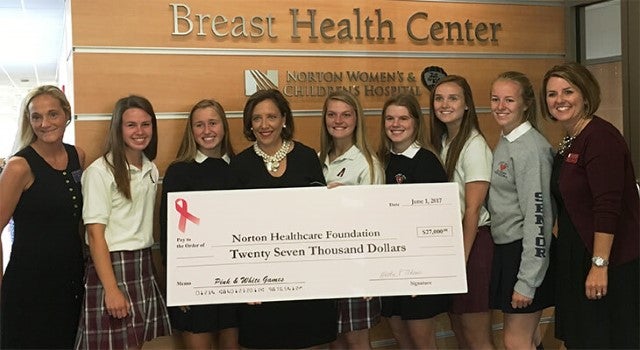 History abounds with famous rivalries. From the Hatfields vs. the McCoys, or even the “beauty wars” between Elizabeth Arden and Helena Rubenstein, few of these famed conflicts have ended well. The students from Assumption High School and Sacred Heart Academy — two all-girl, Louisville-area high schools — could teach others a valuable lesson about coming together for the greater good.

For the past 10 years, these schools have set aside traditional rivalries to support the fight against breast cancer. On June 2, the schools presented a check for $27,000 to Norton Cancer Institute for proceeds from their 10th annual “Pink & White Game” held in April at St. Xavier High School.

The annual Pink & White flag football game started in 2007 when seniors at Assumption High School launched the event as a breast cancer awareness fundraiser. This “girl version” of the annual St. Xavier vs. Trinity football game (another legendary rivalry) soon expanded to include Sacred Heart Academy as the opposing team.

Boys from St. Xavier and Trinity high schools take part by putting on a half-time show at the Pink & White games. Their “dance team” performances have become a much-anticipated tradition over the years.

Since these schools began fundraising for Norton Cancer Institute, they have raised more than $200,000 to help support breast health programs, research and services, including free mammograms for underserved women in our community. Watch the video below to learn more about the impressive students behind the Pink & White game and their commitment to community service.

Read more about the rivalry here.