Local high school football coach back in game after new hip replacement technique — surgery in the morning, home that night 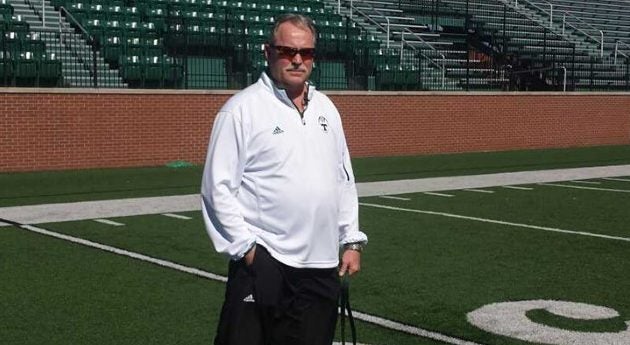 Bob Beatty has achieved tremendous success as head football coach at Trinity High School in Louisville. In his 16 years at the helm, the Shamrocks have won 11 state titles and are consistently ranked among the top football programs in the country.

“From our players to our coaches, we have the desire to outwork anybody,” Beatty, age 60, said. “That’s a big key to our success.”

But two years ago, Beatty found an opponent that no amount of coaching or hard work alone could defeat: hip pain. It was a problem that kept getting worse.

“It really started hurting before [the 2015] football season,” he said. “We were winning big games and I wasn’t having any fun. Instead of going on the field and celebrating with my players, all I wanted to do was sit down. The pain was that intense.”

Beatty needed a hip replacement. He learned about a new procedure that would not require an overnight hospital stay and would have him back to work in just three weeks.

It’s called anterior-approach same-day hip replacement surgery. Unlike traditional hip replacement — which can require a four-day recovery in the hospital — patients are walking hours after the operation and are home that night.

The difference: Traditional hip replacement is performed through a posterior approach, meaning from the back or side of the hip. Same-day hip replacement is performed through an anterior approach, or from the front of the hip. The anterior approach separates muscles, as opposed to cutting them off at the bone, leading to a quicker return of function for most patients. Not only may patients recover faster, but certain complications, like hip dislocation, are dramatically reduced.

“Same-day hip replacement has really become popular in the past year,” Dr. Yerasimides said. “For me, the operation takes about 45 minutes, and patients are really pleased with the results.”

While many are singing the procedure’s praises, there are a few limitations. It currently is only for people age 65 and younger who are in good health and active. Patients still must cope with muscle and tendon pain associated with recovery from hip replacement.

Beatty was a perfect candidate for the operation, which Dr. Yerasimides successfully performed in late January 2016.

“I went in for surgery at 8 a.m. and was in my recliner at home by 5:01 p.m. that evening,” Beatty said. “The bone-on-bone pain I’d been feeling for years was instantly gone. I was up walking and even doing some stairs that afternoon.”

While doing physical therapy on his own, Beatty returned to work in mid-February, three weeks after his operation. He can’t wait to get back to planning for the upcoming football season and celebrating big wins this fall.

“I still feel some muscle and tendon pain but I’ve seen significant progress in such a short amount of time,” he said. “Dr. Y and his team were as efficient as a good football staff. I’m extremely happy with my decision.”