I ride for kids with cancer | Norton Healthcare Louisville, Ky.

I ride for kids with cancer

I ride for kids with cancer 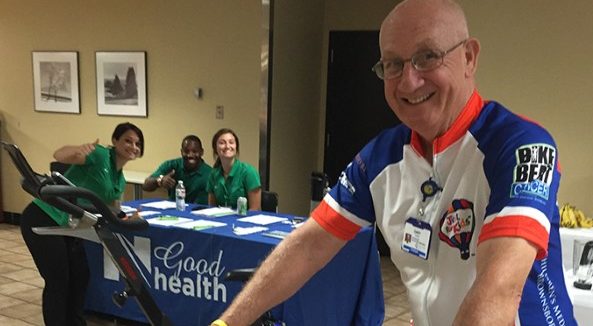 My wife, Mary Jo, and I have been connected to Norton Children’s Hospital as volunteers since 1995, but fast-forward to Bike to Beat Cancer 2012. That year the event was held at Norton Children’s Medical Center – Brownsboro and I worked as a volunteer.

Being a bicycle rider, as I chatted with a few people involved with the event, employees, volunteers and riders alike, hearing and seeing their passion and excitement, my interest in participating was piqued, I saw it as a challenge, and I was motivated to register as a rider.

Do you have a reason to ride? Even if you have not personally been affected by cancer, chances are you know someone who has. The Bike to Beat Cancer is a fundraising event for Norton Cancer Institute. 100 percent of proceeds stay in our community to help cure cancer and eliminate suffering.

Register to ride or find out other ways you can make a difference in our community at BikeToBeatCancer.org.

Even though I had an awareness of cancer, this awareness turned into a cancer awakening for me by a 4-year-old girl named Brooke. In August 2002, our daughter, Kelly, was married and Brooke was her flower girl. In January 2004, Brooke was diagnosed with stage IV Wilms’ tumor and lost her battle in April 2006.

Brooke, whose family has close ties with our family, was a very special little girl and is my inspiration for participating in the Bike to Beat Cancer.

This awakening occurred as I was writing down the names of people to whom I wanted to dedicate my ride, people I knew who had battled or were battling the disease: grandmother, cousin, uncle, brother-in-law, sister-in-law, classmate, neighbor, friend, fellow rider and more.

The list grew longer, and is still growing. The more I thought about it, the more I realized how widespread the affect of cancer has been in my life. This was quite the awakening for me!

In 2013, Team “Just for Kids” was formed for the purpose of raising funds for the Addison Jo Blair Cancer Care Center at Norton Children’s Hospital. Our team is made up of a cross-section of the hospital community, and we’ve been a top 10 fundraising team since the beginning.

As a volunteer at Norton Children’s Hospital, I have the opportunity to interact with the kids and their parents on 7 West (the cancer care center). I’ve seen their struggles to have normalcy in their lives. I’ve met parents who have lost their children to cancer, but I’ve also seen the miracles the very competent medical staff perform.

Not only do I ride for the many people previously mentioned, I ride especially for the kids on 7 West — because of a 4-year-old child and her hope, strength and courage while battling this disease.

When I’m struggling with tired legs on a hill climb or other discomfort while riding, I think of her struggle with this deadly disease and it motivates me to keep on pedalin’!