One-year after no pulse at miniMarathon finish line, Matt Murdock's life is back on track | Norton Healthcare Louisville, Ky.

One-year after no pulse at miniMarathon finish line, Matt Murdock’s life is back on track

One-year after no pulse at miniMarathon finish line, Matt Murdock’s life is back on track

Internal defibrillator will shock his heart back if it happens again

Matt Murdock was nearing the end of the Kentucky Derby Festival miniMarathon last year when he went into a sprint. The race had been postponed due to rain for about an hour and a half, so Matt, like all runners, was a bit hungry and thirsty. He also didn’t have anything to drink until the first water stop.

“After the rain, the weather became humid and I was just running on automatic,” he said.

Matt had trained well for the race. He also was no stranger to the distance; he had run a marathon and three half-marathons before.

No pulse: CPR and defibrillation

“I was doing fine, but as soon as I crossed the finish line I felt like I was going to pass out and then collapsed into the arms of Robin Stinson, R.N.,” Matt said.

Robin works in the intensive care unit at Norton Hospital. She was there volunteering as part of the medical team for Norton Sports Health, which provides medical care throughout the Kentucky Derby Festival miniMarathon and Marathon.  Robin was no stranger to emergency situations; she had served in the Army as a combat medic.

“We’re there to keep our eyes open for people who might need help, but it’s usually giving them water or a sports drink,” she said. “Occasionally someone needs help from one of our athletic trainers, physical therapists and other medical staff for cramping.

“I didn’t see Matt cross the finish line, but all of a sudden he was there and fell into me. I looked at his eyes, and his pupils were dilated. I felt for a pulse but there was none.”

Matt was lowered to the ground and Robin and another volunteer, Tim Amshoff, an athletic trainer from Moore High, assessed him and started CPR. Others summoned EMS to the scene. Still others from the Norton Sports Health volunteer team, EMS and security helped get other runners past safely as well as provide some privacy for what was happening on the ground. 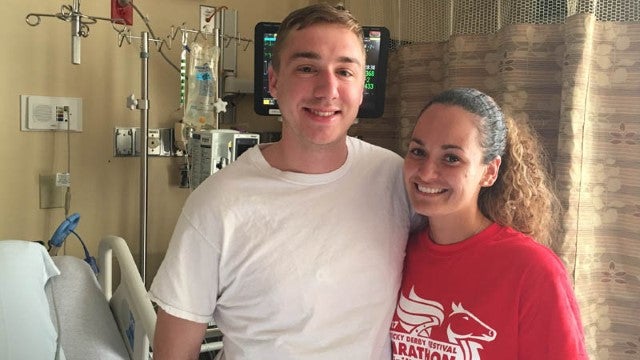 (Above) Matthew and Robin in the hospital last year

“My son had guardian angels watching over him,” Matt’s mom, Brenda Murdock, said.

“I woke up and they were taking me out,” Matt said. “I was completely coherent and making jokes. Everyone seemed more freaked out than I did by the cardiac arrest and recovery.”

An internal defibrillator, just in case

Matt will be 25 years old in May. He recently moved to Dallas, Texas, for a promotion in aerospace engineering. While doctors could not definitively say what caused the cardiac arrest, they took measures to help keep it from happening again. He had heart surgery in June 2017 to insert an internal defibrillator (S-ICD).

“It was a perfect storm,” Matt said of his collapse. “I have a thicker heart muscle, like some athletes. The internal defibrillator will shock me should my heart ever stop again.”

He says the entire experience has changed how he views life — he prioritizes God, his family and friends. He says he’s more easygoing than he used to be. And he’s still very grateful to Robin, the volunteers and the EMTs who helped him that day as he crossed the finish line.

In the hospital on the day of Matt’s collapse, Robin’s son Howie had asked to meet the man his mom had saved. Matt told Howie, “Your mom is my hero.” Howie and his brother, Alex, have a lot of similar interests as Matt did as a young boy, such as Legos, Pokémon and race cars.

In that moment, a special bond was created between the Murdock and Stinson families. Matt, Robin and their families reunited in July 2017 in Cincinnati, Ohio — they went to a Reds baseball game and boated on the Ohio River. Since then, the families have visited with each other regularly.

“We have formed a very special friendship,” Brenda said. “We have gone to Indianapolis Speedway, Creation Museum and value our quality time together. We are blessed and grateful to develop this lifelong bond. I will be forever grateful for Robin and the Norton medical staff for saving my son’s life.”

Matt won’t run the miniMarathon. Doctors have advised him to stop running competitively — why tempt fate twice, he said. Still, he runs three to six miles to stay in shape, but no longer runs longer distances.

“The KDF runners are in good hands with the volunteers and medical staff from Norton Healthcare,” Matt said. “Robin and my mom are volunteering together to celebrate the one year anniversary of my survival.”

As for his advice to this year’s runners, Matt said, “Stay hydrated.”