Spread some encouragement on Sept. 12 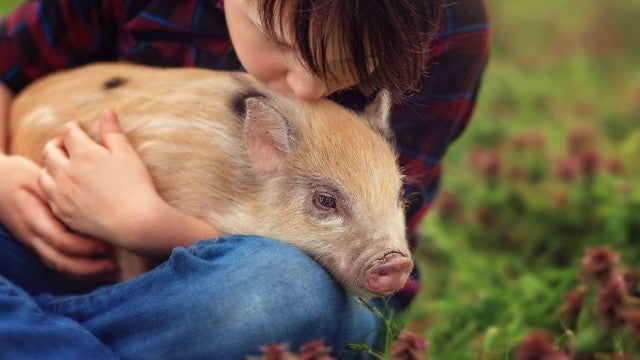 When I was 10 years old, I got Dog. My sister’s boyfriend brought him home to us from the Sale Barn.  Dog was the runt of the litter, and since he was tiny, in ill-health and not expected to live, the auctioneer sold him for $1. My sister’s boyfriend didn’t see the harm in bringing Dog to our little farm, which already was home to goats, chickens, rabbits, and an assortment of stray cats. My father was not happy about the addition of another animal, but since Dog’s prognosis was so grim, he didn’t put up much of a fuss.

My siblings and I kicked into high gear, feeding and caring for Dog around-the-clock. The barn was our critical care unit, and we were quite a team. Each day we tended to Dog, updated the goats on Dog’s condition and enforced visiting hours. Remarkably, not only did Dog live, but he thrived! He was the best Dog ever — sort of.

You see, Dog was a pig. Only Dog didn’t know he was a pig. Among the lasting effects of Dog’s infant maladies was a persistent inner-ear imbalance that not only made him hard of hearing, but also caused him to fall over every 100 feet or so. In addition, Dog suffered from identity confusion. Although he was a pig, he loved our dogs. My daily chores included pouring Dog’s slop into a pan next to him, lifting the flap of his ear and yelling “Dog! Wake up!” repeatedly while rocking his body back and forth until he grunted himself awake and ate his breakfast. Afterward, I’d open the gate so Dog could play with our dogs (the real ones) in the yard all day. Our three dogs would greet him at the gate, then turn and sprint across the yard, with Dog in hot pursuit, running as fast as he could but leaning increasingly to his right until he fell over. After struggling to his feet, he would take off again, only to repeat the cycle. This was Dog’s life.

Dog believed he was a dog with such sincerity and glee that I wanted to believe too. Who was I to take away his delusion?

There’s a lesson to be learned.

Although Dog conducted himself as a dog, he never would pass for a dog. He was created a pig, and everything about him said “pig.” I’m not saying Dog was living a lie; he truly believed in his delusion. But Dog never fully lived his true self as a pig.

As you go throughout your day, are you living as the singularly gifted, unique and amazing person you are? Is the core of your being reflected in your everyday interactions?  If not, what is your life missing that might be enriched and enlivened if you were to bring your true self to the table?

You are here for a reason — to contribute what only you can. But that’s only possible if you’re tending to yourself. As Buddha noted, “You, yourself, as much as anybody in the entire universe, deserve your love and affection.”  So take time to care for you.  Go for a walk.  Reconnect with a friend.  Read a book.  Be purposeful about being kind to yourself. Give that critical voice in your head a break. It may feel selfish, but you’ll have more energy to care for others when you take the time to care for yourself.

Sept. 12 is the National Day of Encouragement. Don’t forget to reach out and encourage a friend or co-worker during the day. You’ll be surprised at how good it will make you feel. Send a card or tell someone at work “Good job!”  And don’t forget the power of laughter — and chocolate.

As Dr. Seuss wrote: “Unless someone like you cares a whole awful lot, nothing is going to get better. It’s not.”