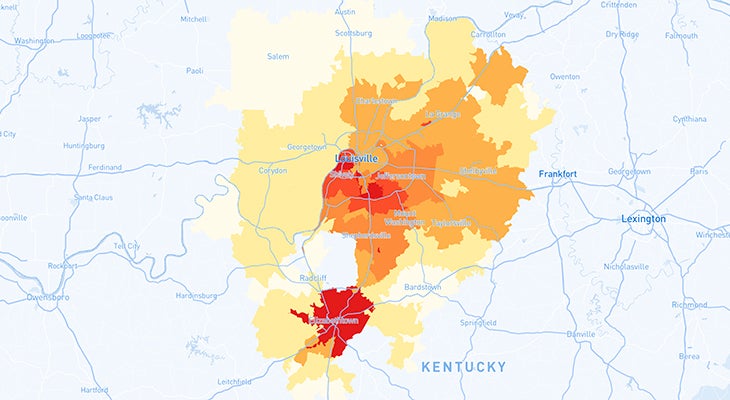 The city reported 600 confirmed cases last week, down from about 880 reported each of the previous three weeks.

The current flu vaccine is designed to protect against four strains of flu — two influenza A and two influenza B. The Centers for Disease Control and Prevention said last week this season’s vaccine “might offer protection” against influenza B viruses currently circulating around the country.

Influenza B typically shows up late in the season, but the CDC reports it has been infecting people around the country earlier this season.

The number of flu cases treated by Norton Healthcare providers and confirmed through laboratory testing rose 6.5% from the previous week’s revised total of 1,037.

Another 272 cases were diagnosed by Norton Healthcare providers last week based on symptoms and not sent for laboratory confirmation. So far this season, there have been 10,901 diagnosed cases, including 8,267 confirmed by lab tests.

Areas most heavily affected by the flu this season have been in western and southern Louisville and in Bullitt County.

A Flu Shot Still Can Help

There’s still time to get a flu shot. While it takes about two weeks for the shot to protect you, it can lessen the severity of symptoms if you catch the virus.

Flu Treatment When You Need It

Norton Healthcare has convenient options for flu symptom treatment in kids and adults, including 24/7 access to a provider in person or online.

Tips from a nurse on how to prevent the flu

Is it the flu or a stomach bug?

Is it a cold or the flu?

Touch or mouse over an area for detail