Only two small incisions were needed, as robotic assistance allowed for a minimally invasive surgery that sped her recovery. 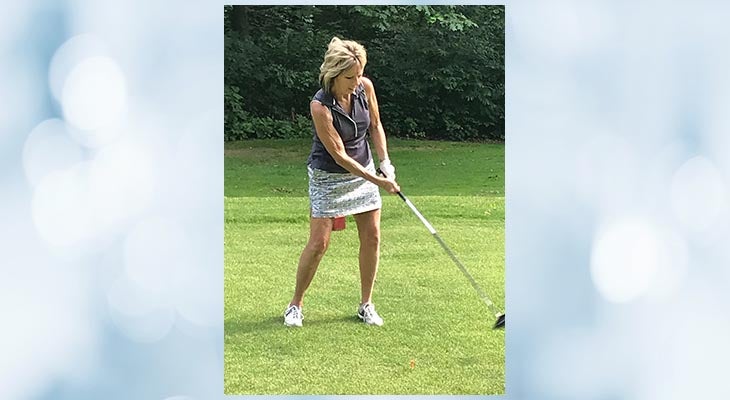 As the golf cart rounded the tee box of the first hole, Terri Tackett’s excitement began to build. She stepped out of the cart and reached into her golf bag for her driver.

The weight of the club in her hand. The fresh air of the course on her face. Familiar feelings she once thought she’d never again experience, yet here she was.

As she fixed her grip and steadied her stance, she braced for what was to come next — the twisting of her torso from backswing to downswing and follow-through. It would be the first time she’d swung a golf club in two years. This time, it was pain-free.

“The recovery was fast — I could’ve gone golfing sooner if the weather would’ve cooperated,” Terri said.

Jeffrey L. Gum, M.D., orthopedic spine surgeon with Norton Leatherman Spine, created a 3D of Terri’s condition, which he used to plan her surgery. With the help of a new Mazor X Stealth robot, Dr. Gum was able to place screws and rods with high precision, restoring Terri’s spine to its natural position.

Only two small incisions were needed, as the robotic assistance allowed for a minimally invasive surgery that sped Terri’s recovery and preserved muscle in her back that would have been cut in traditional surgery.

Terri had been limited by degenerative spondylolisthesis, a condition in which a vertebra slips forward onto the bone below it, putting pressure on nerves near the spinal cord.

“It was hard for her to walk very far because of her leg pain,” Dr. Gum said.

Dr. Gum was confident he could make walking easier for Terri, and with the help of this minimally invasive technique, get her back to moving easier sooner than most patients who’ve undergone similar surgeries.

Norton Leatherman Spine was one of the first spine centers selected to use the Mazor X Stealth robot, in large part due to its history of research and international leadership advancing spine care.

“We get the opportunity to do a lot that other centers don’t get,” Dr. Gum said.

In all, Terri needed eight screws and two rods to restore her spine. Without the robot’s ability to help with precise surgery in tight spaces, Terri would have needed traditional “open” surgery that would have required cutting about twice as much of Terri’s muscle, leading to a longer recovery.

Precision is key in spine surgery, because it leads to less muscle tearing. While surgeons get very close, technology takes precision to the next level, identifying areas not visible to the naked eye. Robotic technology allows surgeons a closer look, in real time.

Norton Leatherman Spine in Louisville and surrounding communities in Kentucky and Southern Indiana offers world-renowned care from surgeons who are recognized for their innovation, expertise and skill.

Terri struggled with back pain for nearly a decade as in her lower back took their toll. In 2013 the pain reached a level she could no longer bear. That’s when she began receiving epidural pain blocks regularly.

“The last epidural I had lasted about two weeks, and I was back to severe pain again,” Terri said. “There were mornings where my husband had to help me out of bed.”

The pain began to rob her of her life. She was unable to do many activities that bought her happiness, like golf, yard work, shopping, going to her grandson’s baseball games and painting.

“I love crafts, and I could no longer paint, because I couldn’t sit for an extended period of time,” she said.

With the intensity of the pain growing, Terri turned to pain relievers.

“Everything I did was so painful — I was taking pain pills all the time and realized that’s no way to live,” she said.

After surgery, Terri immediately began to experience relief. When she first stood up, she no longer had pain shooting down her legs. As her spine healed, her back pain dissipated. She couldn’t wait to get back to the activities she’d missed out on for years.

“Getting back on the golf course was a lot of fun, like a freedom — like I had my life back,” she said. “Dr. Gum told me he couldn’t improve my game, but he could help me feel better — and he was right — my game and score didn’t improve, but I had fun and it didn’t hurt.”

“This is what gets me out of bed to come to work,” Dr. Gum said. “I am really excited with how she is doing, and that is why I want to continue to push the envelope as far as what we can do with modern technology — because this is only a glimpse of what we can do in the future.”

Terri was reluctant to have surgery and had put it off. Looking back, she says she would have had the surgery much sooner — had the minimally invasive robotic technology been available sooner.

“I didn’t know it could help me this much,” Terri said.