Mosell and his mother arrived in Louisville in July and stayed with family. Dr. Puno performed the operation in August. 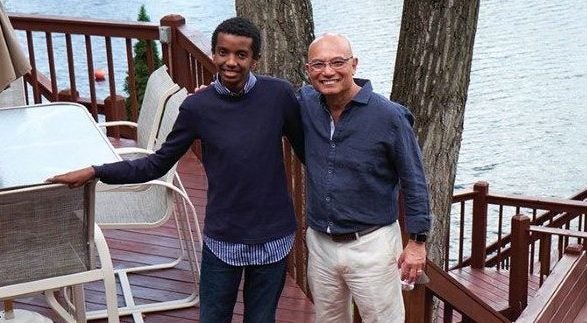 Rolando M. Puno, M.D., is known for donating his talents. The spine surgeon at Norton Leatherman Spine Center has performed probono surgeries for children around the world.

“I have an opportunity to help people who otherwise couldn’t receive medical treatment,” Dr. Puno said.

His most recent case came from nearly 8,000 miles away. Just a few years ago, 15-year-old Mosell Wakero in Ethiopia was a healthy boy who enjoyed playing soccer.

That changed when he developed kyphoscoliosis, a type of abnormal spinal curvature. The curves became worse as Mosell grew, leading to his shoulders and back becoming crooked. He was bullied by classmates, friends and even relatives.

“I’d stand at the end of lines so people wouldn’t see my back,” Mosell said. “I spent a lot of time alone.”

In addition to physical changes, kyphoscoliosis can cause extreme pain and organ damage. Mosell’s parents couldn’t find proper care for the condition in Ethiopia.

Mosell’s cousin, spine surgeon Ersno Eromo, M.D., had trained under Dr. Puno. He sought his mentor’s help after hearing about the boy’s struggles.

“Imagine what it must feel like to watch helplessly as a child tries to cope with a painful deformity while being unable to shield him from the cruelty of other children,” Dr. Eromo wrote to Dr. Puno. “Although I have the training for this operation, my hospital lacks the resources to be useful.”

Mosell and his mother arrived in Louisville in July and stayed with family. Dr. Puno performed the operation in August.

During the nearly nine-hour surgery, Dr. Puno fused bones and inserted rods in Mosell’s spine to correct the curvature.

The operation was a success. Mosell was walking the next day and soon making laps around the nurse’s station. He stayed at the hospital for less than a week. After a month, he was given the all-clear to return home.

Before Mosell left, Dr. Puno threw him a party, and those involved in Mosell’s care attended.

“Mosell is a fine young man,” Dr. Puno said. “I’m grateful for being able to step into the lives of children and make a difference.”

Even living on the other side of the world, Mosell said he’ll always remember those who came to his rescue.

“I’m so thankful for everything Dr. Puno has done for me and my family,” Mosell said. “It’s like a light shining from the sky on us.”