With the help of preoperative planning and robotic-assisted precision, Jeffrey L. Gum, M.D., can perform a lumbar fusion with a small, minimally invasive incision. 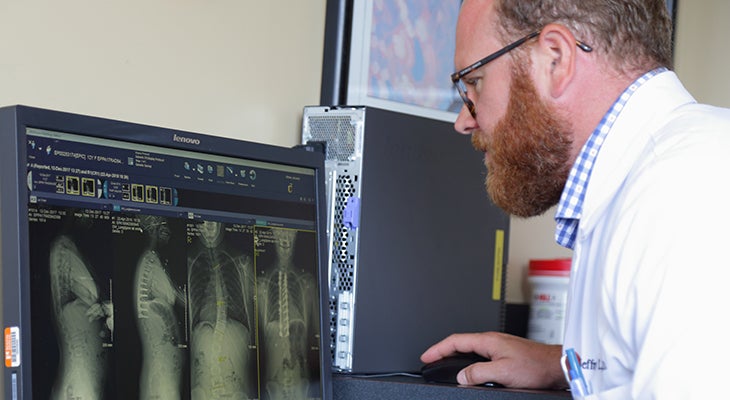 Jeffrey L. Gum, M.D., spine surgeon with Norton Leatherman Spine, has pioneered a new, minimally invasive, robotic-assisted surgery that shortens operations and cuts down on recovery time. His work has attracted attention around the world.

Dr. Gum primarily uses the technique on patients experiencing degeneration in the lower, or lumbar, part of the back. With the help of preoperative planning and robotic-assisted precision, Dr. Gum can perform a lumbar fusion with a small, minimally invasive incision.

The result is less blood loss, less muscle damage and a quicker recovery. Patients typically leave the hospital the day after surgery, instead of having the traditional three-day stay. With the diseased vertebrae fused together, the affected part of the spine isn’t subject to movement that causes pain. The goal is to eliminate leg pain and reduce back pain by half.

Before spinal surgery, patients undergo a computed tomography (CT) scan. This lets Dr. Gum plan the trajectory of the screws he’ll use during the operation. During surgery, computer software uses the plan to guide the surgical arm into position, allowing Dr. Gum to insert the screws at the precise angle to give the best results.

Dr. Gum’s breakthrough was to combine robotic-assisted surgery with a minimally invasive technique.

Minimally invasive surgery also lowers the risk of infection and postoperative pain, which can lessen the need for pain medicine after surgery. This also allows for faster recovery, with less rehabilitation.

In four to six weeks, patients who undergo minimally invasive surgery can be as far along in their recovery as they would be after three to nine months with traditional, “open” back surgery, according to Dr. Gum.

Shortening the length of the operation also means the surgery is possible in older patients who might be unable to tolerate longer surgeries.

Norton Leatherman Spine in Louisville and surrounding communities in Kentucky and Southern Indiana offers world-renowned care from surgeons who are recognized for their innovation, expertise and skill.

Surgeons from as far away as Australia and Japan are interested in learning from Dr. Gum.

In the last year, Dr. Gum has spoken about the surgical technique in Australia, the Netherlands, Italy, Aruba and Canada. Surgeons also have traveled to Norton Leatherman Spine from India and Britain to observe and learn the technique. Surgeons from Australia and Japan are scheduled to visit in 2020.

Dr. Gum spoke about his groundbreaking work with Orthopedics This Week at the North American Spine Society (NASS) annual conference in 2019.

He also is the principal investigator on the first publication comparing the robotic-assisted surgery with standard minimally invasive spine surgery utilizing the new robotic platform (Mazor X Stealth edition). The article will be published in The Journal of Neurosurgery: Spine in 2020.

Previously, robotic technology had been used in hip and knee replacements, but it only recently has become more popular in back surgery

Dr. Gum has been performing robotic surgery since 2016 and has performed more than 180 cases using the robotic-assisted technique. He and a surgeon in Reston, Virginia, were the first in the world to use the Mazor X Stealth robotic system in spine surgery, in January 2019.

In addition to using the technology for lumbar cases, Dr. Gum also has used the robotic system in children with scoliosis.

“In the next 50 years, this is what’s going to change the face of spine surgery,” Dr. Gum said. “I truly believe it’s going to revolutionize the future, and I’m excited to be a part of this movement.”