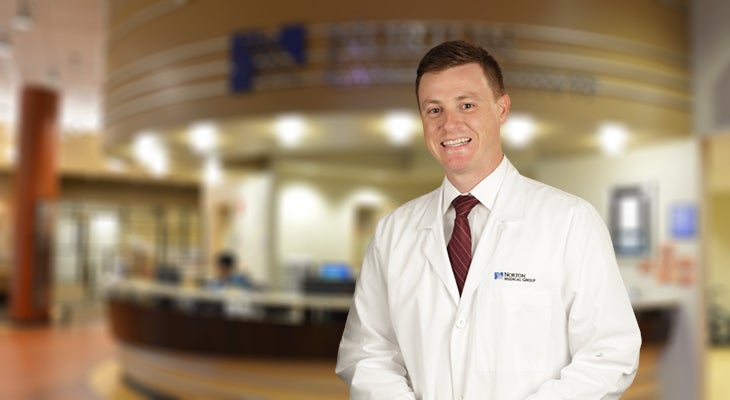 For orthopedic surgeon Kevin Himschoot, M.D., the best part of his job is giving people back what they’ve lost.

“Whether it’s getting back to skiing or kneeling and playing with their grandkids, I have the tools and the training to help,” said Dr. Himschoot, the newest member of the team at Norton Orthopedic Institute.

“The robots we’re using are much better than the human eye at being able to make adjustments by a millimeter or half a degree at a time,” he said.

Norton Orthopedic Institute was first in the Louisville area to use the ROSA Knee System. In addition to its superior precision, the system uses X-rays to create a 3D model of the existing anatomy so surgeons can plan specifics of the replacement ahead of time. Other robotic-assisted systems rely on higher-radiation imaging methods.

Dr. Himschoot also performs the latest total hip replacement technique, which similarly uses X-rays to model the anatomy and allows him to place the artificial hip with down-to-the-millimeter precision.

Our orthopedic surgeons perform thousands of joint replacements a year. Get experienced care from leaders in their field.

“It’s more precise than it’s ever been done before,” Dr. Himschoot said. “Compared with 20 years ago, it’s a night and day difference. It certainly leads to better patient outcomes.”

Giving quality of life back to patients

Originally from Sanford, Florida, a suburb of Orlando, Dr. Himschoot said he wanted to be surgeon since he was in high school.

“Surgery was my first dream, my first and only passion of what I wanted to be when I grew up,” he said.

Surgery was a natural fit since he spent a lot of time growing up working with tools with his father, and with his uncle, who fixed houses for living.

“When I did my orthopedics rotation in medical school, it felt like it was back home,” he said. “It just clicked.”

Dr. Himschoot attended Florida State University College of Medicine, in Tallahassee, and did his medical residency at the University of Louisville School of Medicine before his fellowship in hip and knee replacement at Norton Brownsboro Hospital.

“I think the biggest the reason I went into the reconstruction work is giving people back what they had in terms of a functionality and quality of life,” Dr. Himschoot said. “That’s how I try to approach patients. I’m lucky to be in a field where I can do that.”

When he’s not working, Dr. Himschoot enjoys spending time outside. As a native Floridian, he loves fishing and spending time on the water. He also enjoys time with his family and 6-month-old son.

New to Louisville, Dr. Himschoot said he is impressed by his new neighbors’ warmth and hospitality.

“There’s a culture and a pulse to the city I’ve enjoyed getting to know,” he said. “I want to stay here and make it home.”