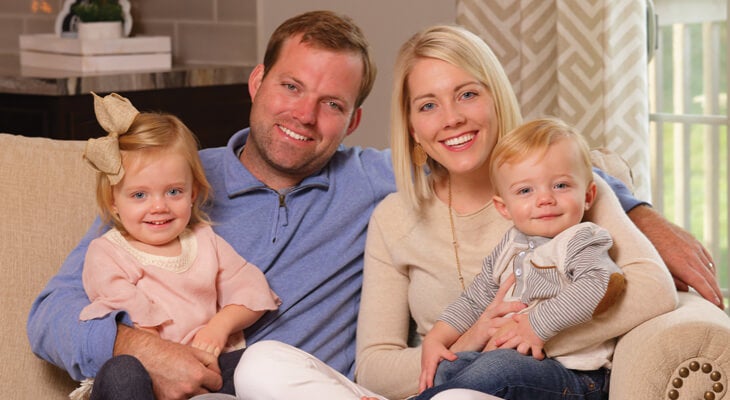 Lacey Amlung, 28, is a busy mom with a career and two young children, enjoying life to the fullest. Things couldn’t get much better — and having a potentially life-threatening health crisis was the furthest thing from her mind. She had no idea a blood clot was forming that put her leg at risk for amputation.

In September 2017, Amlung awoke to ﬁnd her left leg red and swollen. She was in pain and couldn’t walk on that leg. Her husband rushed her to Norton Brownsboro Hospital, where an emergency medicine physician quickly ordered an ultrasound of her leg.

“By the appearance of the leg with the symptoms Lacey was describing, the ultrasound was able to conﬁrm that she was suffering from severe deep vein thrombosis, or DVT,” said Hanna Davis, D.O., vascular surgeon with Norton Vascular Surgery. “It was determined she also had a rare condition known as May-Thurner syndrome, which occurs when there is compression on the left common iliac vein by the right iliac artery, located in the pelvis. It affects the left leg and causes extreme pain, swelling and sometimes blood clots.”

Blood clots can block blood ﬂow out of the leg. Dr. Davis compared the blockage to a dam.

“The vein moving blood out of the leg was blocked by the clot as high up as the belly button,” Dr. Davis said. “The circulation to her left leg was cut off down to her ankle. It had probably been blocked for a few days and she was just now starting to show signs, including swelling two times her normal leg size and the inability to walk.”

Amlung remembers everything happening so quickly that it was almost a blur.

“I remember thinking the worst. What is happening to me and what about my husband and children?” Amlung said. “But Dr. Davis was very kind and calming. She explained to me the severity of the situation and that surgery needed to be done.”

Amlung underwent two minimally invasive surgeries in two days. The initial surgery was to return blood ﬂow to her leg. Dr. Davis also placed a ﬁlter that would prevent blood clots from traveling through the body.

“After surgery, Lacey was given a series of medications to help break up the blood clot,” Dr. Davis said. “After 24 hours of the medication, I was able to perform a second surgery where we entered through the back of her knee and removed any residual clots. A stent was then placed in her leg to keep the vein open and allow the blood to drain from the leg.”

The surgery was a success, and Amlung went home the next day. She now sees a hematologist and takes a blood thinner to prevent more clots from forming.

“Most people with DVT are managed with medication in conjunction with compression to help relieve the symptoms, especially swelling in the leg,” Dr. Davis said.

Who is at risk for DVT?

DVT can be very serious because blood clots in the veins can break loose, travel through the bloodstream and lodge in the lungs. This is known as a pulmonary embolism, or PE, and can be deadly.

Reduce your risk for DVT