Riding for kids with cancer and a coworker in Bike to Beat Cancer | Norton Healthcare Louisville, Ky.

Almost every morning for the past two years Veronica Cook has hopped on her stationary bike and ridden for an hour. In 2019 and 2020, Veronica used her pedal power to ride with Bike to Beat Cancer as a spin and virtual rider. 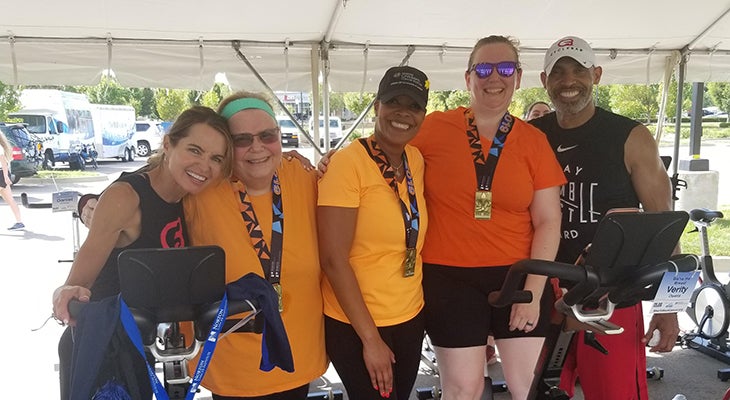 Almost every morning for the past two years Veronica Cook has hopped on her stationary bike and ridden for an hour. In 2019 and 2020, Veronica used her pedal power to ride with Bike to Beat Cancer as a spin and virtual rider.

For Veronica, Bike to Beat Cancer is much more than another session on her bike. It is riding for her co-worker battling breast cancer and for pediatric cancer patients she calls “my kids” at the Norton Children’s Infusion Center. A registered nurse, she has worked as a pediatric oncology nurse with Norton Children’s for more than 30 years.

Normally a distance runner, Veronica was inspired by the challenge of riding in Bike to Beat Cancer because she is so passionate about its mission. Veronica, along with two of her co-workers, Teresa Munson and Verity Owens, registered to ride in the Bike to Beat Cancer spin tent in 2019.

“We had a party going and had an absolute blast,” Veronica said. “I had a goal of riding 15 miles in one hour, and the trainer pumped us all up and helped me reach my goal.”

Although pandemic precautions made a spin tent impossible last year, Veronica rode at home as a virtual rider.

“It was such a blessing to me that Bike to Beat Cancer continued in 2020,” Veronica said. “We can’t stop the fight — even in the middle of the pandemic — because cancer doesn’t stop.”

Veronica loves the physical challenge of Bike to Beat Cancer and how it encourages people to better their health.

What is most special to Veronica, though, is being able to make an impact for “her kids” and their families. Veronica sees that impact each day.

“When kids are first diagnosed, I’m sometimes one of the first nurses they see,” Veronica said, through tears that showed it is an emotional topic for her. “I let them and their families know that I’m in their corner. We are going to fight with you.”

“We” are her colleagues who treat kids at Norton Children’s Cancer Institute, affiliated with the UofL School of Medicine. The infusion center is part of the cancer institute.

“When I think about every bag of chemo I’ve hung on these kids, it pushes me through. And, then I see the ‘I Ride For’ signs that people have made, and it is such a motivational moment because I know some of those names and think of their stories,” Veronica said.

Veronica would encourage anyone thinking about registering for Bike to Beat Cancer to sign up and take it one pedal at a time. For those intimidated by the fundraising goals, she’s found that people want to support this fight and are willing to donate.

“I cannot stop. We cannot stop this fight until we cross the finish line,” she said.