Bruce Lowe has been a committed Bike to Beat Cancer participant since 2014. After learning about the event while receiving treatment at Norton Cancer Institute, Bruce vowed to ride as soon as he could. 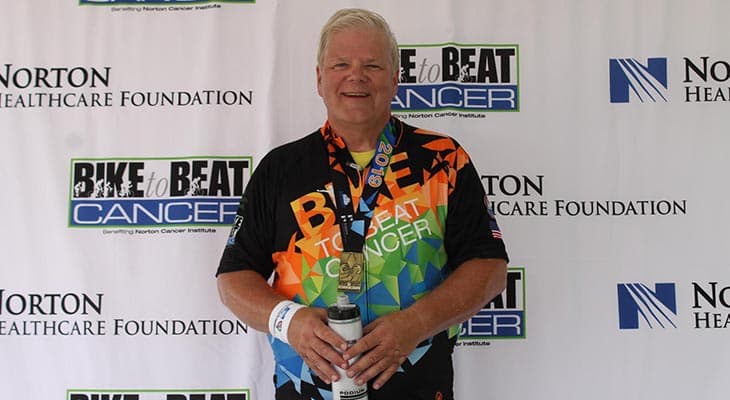 Bruce Lowe does not take being a cancer survivor for granted. Indeed, surviving three different cancers has given him a mission.

“My doctor told me that I had stage 4 incurable bone cancer and had only two years to live. That was seven years ago,” Bruce said. “I am now cancer-free, and I do all I can to assist others in their journey through this devastating disease. Raising money is just one small thing that I can do to help others.”

Bruce has been a committed participant in Bike to Beat Cancer since 2014. After learning about the event while receiving treatment at Norton Cancer Institute, Bruce vowed to ride as soon as he could. He was too weak from his chemotherapy treatments to ride in 2014, so he volunteered. The next year, he rode 35 miles and volunteered after he finished. Since then, he has ridden 65 miles every year and has a goal of riding 100 miles in this year’s Bike to Beat Cancer.

“Sharing is one of the best things we (survivors) can do,” Bruce said. “To hear the stories and determination of survivors to beat cancer and not to just survive but to thrive … is so encouraging.”

To join Bruce in making an impact for the Norton Cancer Institute through Bike to Beat Cancer, consider riding or volunteering.

Passing his encouragement on to others

The camaraderie of the riders is an important part of the ride to Bruce. He recalls one ride when he was struggling up the last few hills, and members of another riding team came alongside him and got him laughing across the finish line.

He has found that encouraging others on the ride can help both ways.

“I met a woman on one of the rides who was struggling to make it on the ride. She had just finished her chemo and really didn’t have the strength to ride yet, but she had such determination. I was trying to motivate her, but I got motivated by her,” Bruce said.

Bruce also provides encouragement throughout the year. He knows so many people personally going through cancer and provides his support. He does the same for people he’s never met.

“Norton Healthcare has prayer request cards in their chapels, and my wife and I pray on an ongoing basis for all of them also, ” Bruce said.

Whenever the weather permits, Bruce is on his bike training. He finds that it is great exercise and helps him prepare for Bike to Beat Cancer. He would encourage anyone thinking about riding to get out and ride as much as possible. He also recommends becoming a part of the Louisville Bicycle Club or Southern Indiana Wheelmen Association to enjoy their training rides.

Cancer has had such an impact on Bruce’s life and family, and it drives him each day. At the age of 21, Bruce lost his father to leukemia, leaving a “hole in his heart” that devastated his whole family. It is that devastation that Bruce never wants another family to go through.

He also wants to make sure the medical advances and new technology that saved his own life are in place for others at the Norton Cancer Institute.

“During my lifetime the word cancer went from meaning a death sentence to being treatable and beatable,” Bruce said.