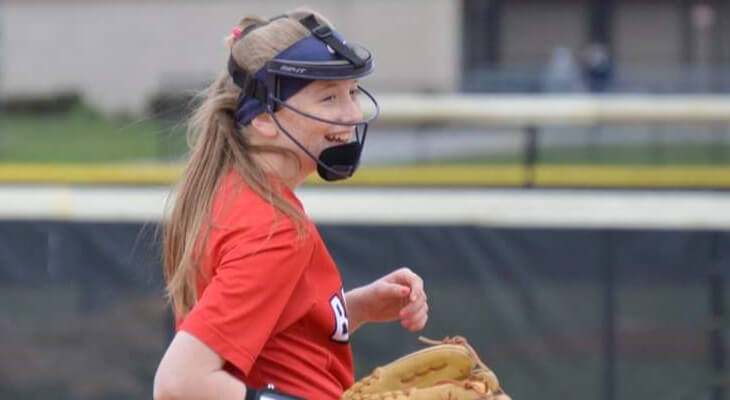 Just months ago, 13-year-old Reagan Herndon made the Butler Traditional High School junior varsity girls softball team — a feat that brings her one step closer to her dream of playing softball for Western Kentucky University. But it didn’t come without struggles. Years earlier, Reagan feared scoliosis would mean she’d have to say goodbye to her love of playing sports.

Her journey is one of overcoming adversity. She hopes to encourage and help other children who are working to overcome their own personal struggles.

“It’s fulfilling to know that I helped someone and made their life a little bit better,” Reagan said.

As a volunteer at Norton Women’s & Children’s Hospital, Reagan works with pediatric patients in physical therapy. Many of those children have scoliosis — an audience Reagan can relate to.

Years in a back brace weren’t fixing the scoliosis

Then they tried to control her spinal curvature with a back brace. The hope was that as her spine continued to develop, the brace would guide it in the right direction.

By the time Reagan was 11, her curve had progressed to the point the brace just wasn’t working. Because she had plenty of growing yet to do, “we knew the curve would continue to get severe, so we moved forward with surgery,” said Reagan’s orthopedic spine surgeon, Charles H. Crawford III, M.D., with Norton Leatherman Spine.

While Reagan was afraid of how the surgery might impact her active lifestyle, she was ready for some relief. Her curved spine hit her ribs, causing frequent pain. She also was self-conscious about her uneven shoulders and legs, her out-of-place hip and a hump on her back.

The surgery turned out to be life-changing for Reagan.

“We straightened out her spine and she did fantastic,” Dr. Crawford said.

Reagan felt like a new person after surgery — the hump on her back disappeared, the pain subsided and she was taller.

“She was 2 inches taller after surgery, that’s how much they straightened out her spine,” said Reagan’s mother, Jenni Herndon.

“After surgery I felt like I had a new spine in place in my back,” Reagan said. “I forgot how to walk because I’m not used to my spine being straight, so I had to readjust myself and adapt to the change.”

Reagan now lives and breathes softball. You’d never know she has two rods and 18 screws in her spine.

“Knowing I have a disability against sports won’t stop me,” Reagan said. “I’m doing the same thing as the other girls on my team.”

She hopes to serve as an advocate for others struggling with scoliosis. Sharing her story is her first step.

“I think when people go into health care [as a career], their primary motivation is to help people, and that is the most rewarding thing we can do,” Dr. Crawford said. “And to see patients pass that along to others who need help is fantastic.”