A Norton Healthcare nurse had gastric sleeve surgery, and her results are amazing. 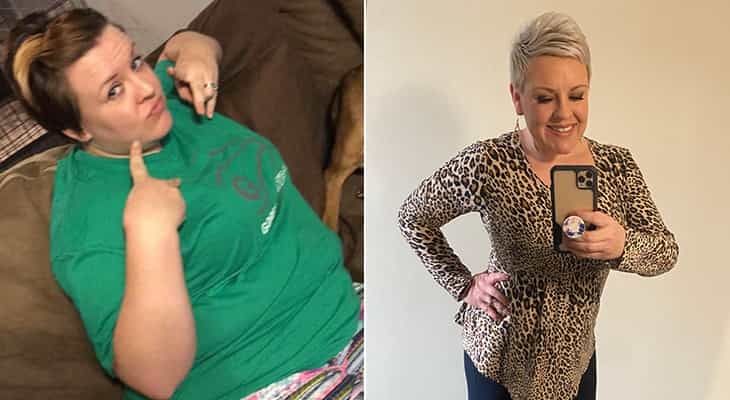 For some, the choice to have gastric sleeve surgery and then actually go through with it may be a monthslong or yearslong process. Not so for Devin Gehrke, R.N., clinical nurse educator at Norton Women’s & Children’s Hospital. From the moment she considered vertical sleeve gastrectomy to her recovery from it was about six months. This is Devin’s story of life after weight loss surgery.

When her first child was born when Devin was 18, she gained around 70 pounds with the pregnancy. Then college and nursing school followed, and she never did lose the baby weight.

“I feel food was always the problem for me. I have never been diagnosed with an eating disorder, but I had some bad habits,” she said.

Those bad habits continued through her 20s.

In October 2017, Devin’s mother made some observations that kicked off her daughter’s path to more permanent weight loss.

“We were sitting at her doctor’s office, and my mom said, ‘You look miserable. You look uncomfortable,’” said Devin, who was 31 at the time. “I felt miserable and I was uncomfortable.”

During that call, Devin was told that her height (5 feet, 1 inch) and weight (207 pounds) very likely would qualify her for surgery. The next step was to attend a free bariatric surgery seminar.

Her surgery was scheduled for February 2018.

Weight loss surgeries can be put in two main groups: restrictive and malabsorptive. Restrictive surgeries, including gastric sleeve and lap band, limit the stomach’s capacity and leave the rest of the gastrointestinal tract intact. Some surgeries can be reversed. Malabsorptive procedures include gastric bypass — the oldest and most commonly performed bariatric surgery in the U.S. These surgeries physically limit the stomach’s size and also reroute the food so that less nutrients can be absorbed by the body.

“I knew I wanted a permanent solution,” Devin said. “I knew my mindset had to change, but I had the surgery so I could fix my brain. I don’t have to diet now; I can just … live.”

Devin’s post-surgery life is all about living and eating mindfully, although she still battles “diet mentality.”

“There are times I fall off my eating plan, but now, I don’t beat myself up about it for days. I move on,” she said.

She also started lifting weights and working out on her Peloton stationary bike. She loves podcaster Kim Schlag’s show “Fitness Simplified.” She eats within her stomach’s limit and understands how her body works so she doesn’t overstretch the muscle and undo the hard work she’s put in.

Two years ago, Devin also had what is referred to as a “mommy makeover,” including a breast lift and augmentation, and a tummy tuck.

“It was almost like instant abs,” she said. “It was one of the best things I’ve ever done.”

Devin uses the resources available through Norton Weight Management Services, including the dietitians.

“They also recommended the book ‘The Obesity Code,’ which really got me going in the right direction.”

“The surgery won’t solve all your weight management problems. But for me, it helped me slow down my eating so I could focus on other issues related to my weight,” said Devin. She takes bits and pieces from many programs, books, podcasts and resources to help create a lifestyle and plan that fit her and her goals.

Devin didn’t have to look far to find a great care team for her weight loss journey.

“I was already working for Norton Healthcare, so it was the obvious choice,” she said.

“The thing about Devin choosing me and the group at Norton is that she’s a medical professional. It’s one of the biggest compliments a surgeon can get, to have an insider view of the hospital and medicine, and to have me as her surgeon,” Dr. Sweeney said. “She has a deeper knowledge of surgery and medicine, and we engaged in a real partnership to help her reach her goals.”