What’s the connection between migraine headaches and military service?

What’s the connection between migraine headaches and military service? 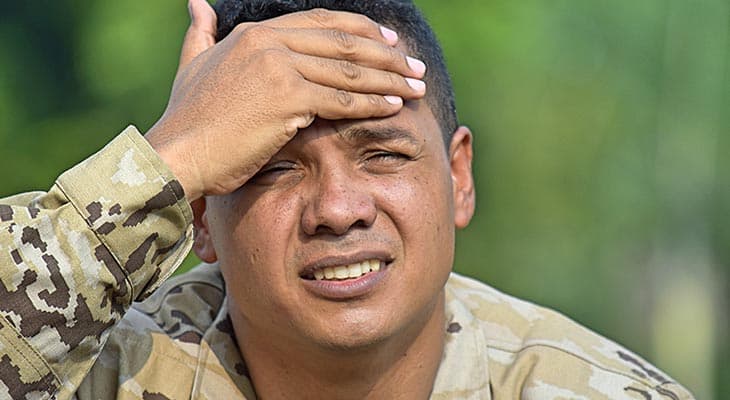 Jeremy Jackson has served five tours of duty in Iraq and Afghanistan. Over the years Jeremy has survived mortar blasts, roadside bomb attacks and a Humvee rollover. Now posted to Fort Knox, Kentucky, as an operations supervisor, Jeremy is one of many whose military service appears connected to headaches and migraine.

The Department of Veterans Affairs reports that veterans are more likely to experience migraine and headaches than non-veterans. Nearly a third of veterans who served a one-year deployment to Iraq were diagnosed with migraine or showed signs of the condition.

Jeremy started developing migraine after a roadside bomb attack in 2008. The issue got progressively worse, and by 2011, he experienced several migraine attacks per month.

“Now, I average anywhere from one to three migraine [episodes] a week, and I have headaches every single day,” he said. “The only thing I can do is go lie down. … When the migraine really kicks in, there’s a tendency of getting cold sweats, the throbbing and all that in your head, and then it makes you nauseous, and then I start throwing up.”

“We have a lot of veterans who are referred into our practice, and they all have very different, but similar stories,” Dr. Plato said. “Many had exposures to a direct head injury, or many of them are around a lot of blasts. I think a lot of people don’t understand the consequences of being near a blast.”

Many don’t recognize that their brain was affected, so it can be months or years before they get treatment, according to Dr. Plato.

Over the past several years, new migraine medications have become available. Preventive treatments for migraine can include oral medications, monthly injections and Botox, which is done every three months. There also are medications that can ease the symptoms once a migraine strikes.

Jeremy, who also has been diagnosed with an acquired brain injury, takes medication and receives Botox for his migraine symptoms. The treatment helps, but the condition is still an issue for him.

“With the Botox, I probably have one migraine a week instead of three or four,” he said.

While the medication doesn’t always stop a migraine once it starts, it often will prevent the nausea and vomiting.

Even with medications and current treatments, there’s still no cure for migraine. But Dr. Plato is optimistic, as interest in the condition is growing.

“I wish that I could say that there was some revolutionary treatment that was just around the corner, but that wouldn’t be true,” he said. “Treatments that have been developed over the past several years are making researchers recognize that this is a condition with a high level of disability that affects many people. And so I think that you’re going to see significant progress on this over the next five to 10 years.”

“Fighting overseas, I never thought I would end up with an enemy in my own head,” he said. “And I know many others in the same boat. We just want it to get better.”