When comforting a patient means caring for a canine | Norton Healthcare Louisville, Ky.

When comforting a patient means caring for a canine

When comforting a patient means caring for a canine

Norton Audubon Hospital nurse’s compassion leads to rescue of patient’s senior dog: Thanks to Penny Manning, R.N., Duke the pug has a loving home while the patient has peace of mind about his four-legged family member. 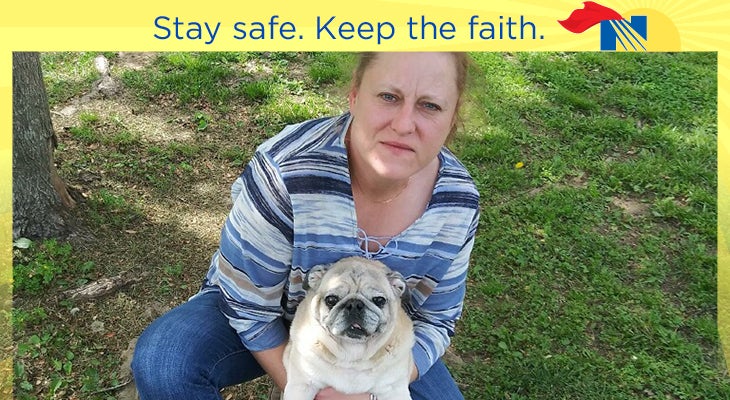 Many pet owners would agree their four-legged family members are loved just as much as their human counterparts. And for some, a beloved pet is the only family they have.

That was the case for a patient admitted to Norton Audubon Hospital amid the COVID-19 pandemic. He didn’t have the virus, but he did have a long hospital stay ahead. The terminally ill man had arrived by ambulance, leaving behind the only family he had — a 12-year-old pug named Duke.

Lucky for Duke, Penny Manning, R.N., was assigned to care for his human on one fateful day that probably saved the dog’s life.

When Penny introduced herself to the patient, she asked her usual questions to get to know a little bit about him.

What the patient didn’t know about Penny is that she was just back to nursing after three years off from complicated back surgery, during which time she began rescuing and fostering dogs and cats as an outlet for her desire to care for others.

Or so she thought.

Penny learned the patient was distraught over his dog left uncared-for at home. He had no family or friends to look after Duke, and by this time the dog had been alone in the patient’s apartment for two days.

“The dog was all this man had,” Penny said. “Duke literally was his whole life.”

The man said he would leave the hospital and check on the dog, then come back. After Penny reminded him he couldn’t walk and advised him not to leave against medical orders, he asked her if she could check on Duke.

That’s all it took to set wheels in motion. Penny and co-workers began making calls to shelters, rescues and people who foster animals. Unfortunately, every plea led to a dead end. It became clear that Penny was Duke’s only hope.

“At this point it had been about four days — we had to get the dog,” she said.

With the patient’s permission and key to his apartment, Penny’s boyfriend, a former animal control officer, retrieved Duke. He found the senior dog — who is deaf, nearly blind and stiff with arthritis — a bit skinny and stinky, but alive.

Penny reported back to the patient that the dog was healthy and safe. She promised as soon as the pandemic is over, she’d bring Duke to visit.

“The man was concerned someone wouldn’t love the dog or wouldn’t give him back if he was able to go home,” Penny said. “He knows he now doesn’t have to worry about either.”