Norton has a new employee, and he’s more than just a furry face. He’s reducing stress with every pat to his soft yellow head. 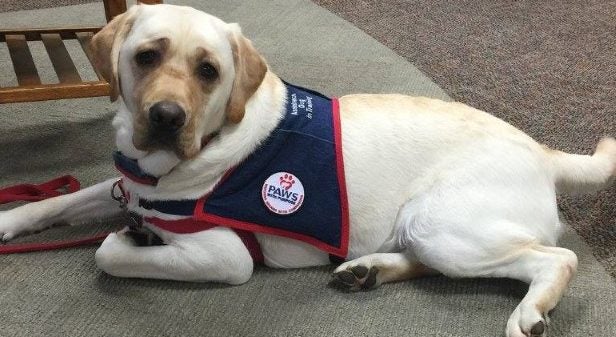 Henry Dog joined Norton Audubon as a full-time therapy dog in early March. He is an extension of the ministry of chaplain Matthew Eddleman, Henry’s “biped.” Although there are other therapy animals that visit Norton Healthcare facilities, Henry is the only one who is considered a full-time employee.

Henry was trained through the Paws With Purpose (PWP) puppy prison program at the Kentucky Correctional Institution for Women. During his training, he and several of his canine friends were frequent visitors during Norton Audubon’s “Furry Fridays.” During Furry Fridays, PWP puppies-in-training visit with staff to help relieve the stress that sometimes comes with providing patient care.

The hospital’s staff advocated for bringing Henry aboard permanently, and Eddleman stepped up to adopt him.

He and Henry trained together for six months. Henry knows more than 30 commands and is continually learning new ones. Before he could start his job in the hospital, though, Eddleman worked with the Norton Audubon administrative team to make sure Henry gives safe care. Henry doesn’t visit rooms unless the patient agrees, and he stays clear of certain areas of the hospital. He is bathed and brushed frequently, and Eddleman removes any hair and lint from the vest Henry wears.

Most of Henry’s work focuses on stress relief for employees. A typical day involves making rounds on busy hallways and units that are typically high-stress “zones,” such as the emergency department.

Henry cares without saying a word, according to Eddleman.

While making rounds recently, Eddleman and Henry stopped in to see patient Mildred Reider. She broke into a grin as soon as she saw Henry’s face. He nuzzled close as she patted his head.

“I love Henry. Henry is an inspiration,” Reider said. “I remember all the happy days with my dog and my cat when Henry visits.”

Henry benefits as well. He knows which of his human co-workers stock their areas with his favorite treats and is sure to visit them when he’s out and about. When Eddleman is out working solo, Henry catches a nap in a crate in the Pastoral Care office.

Henry truly is an extension of the care Eddleman provides to staff and patients. Eddleman recalled an incident when he was called in to comfort a family and left Henry at the nurses’ station. He returned to find Henry cuddling with a nurse who needed some extra TLC. “Sometimes the conversations start with Henry and evolve into deeper things,” Eddleman said. “To see people light up when they see him — that’s worth everything. That’s why he’s here.”