Mary and David Newton were separated by visitor restrictions as she recovered from surgery, but with help from staff they were able to stay in touch. 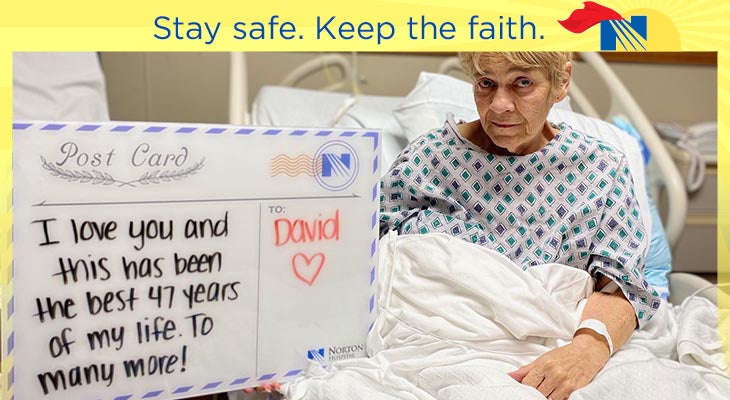 David and Mary Newton haven’t spent more than a few days apart since they were married 47 years ago in Loretta, Kentucky.

As their anniversary approached, Mary was recovering from surgery at Norton Hospital. Visitor restrictions required by the coronavirus pandemic meant David could not be by her side.

“It was pretty hard,” Mary said, about being away from David. “I felt like I was alone.”

Mary wasn’t alone for long. The team at Norton Hospital made sure the Newtons were able to see (and surprise) one another during her weekend stay.

Lesia Grantz, secretary in the invasive cardiology department, first saw David at the check-in desk and told him of the new visitation policy. He mentioned their wedding anniversary was coming up. 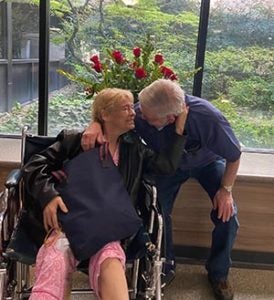 “This couple was so sweet,” Lesia said. “It’s hard for everyone right now, and being in the hospital on your anniversary is bad enough, but not having the support of your spouse makes it worse.”

David came back three or four other times to check in on his wife, and Norton Hospital employees made sure he was able to FaceTime with her during each visit.

“We were trying to ease both of them,” Lesia said. “Mary was very emotional about all the FaceTime. She cried each time seeing him.”

An anniversary and a hoped-for discharge

As the April 6 anniversary drew near, David was hoping Mary would be able to go home in time. He and Lesia started planning a surprise.

Lesia helped him pick out a bouquet of roses, while Mary plotted her own surprise with help from hospital staff.

The staff took a photo of Mary holding a sign with a message for David. A print of the photo would be waiting for him at the visitor desk, along with a gift she picked out at the hospital gift shop.

The biggest surprise for the happy couple came when they were able to go home together on their anniversary.

“It felt so good to be reunited,” Mary said.

Employees throughout Norton Healthcare have made extra efforts to connect patients with loved ones during this time of new visitation restrictions during the COVID-19 pandemic.

“These times are especially difficult for patients when they cannot have their loved ones by their side,” Kristin said. “We are trying to do everything we can to keep them connected every day.”