A special Easter for Jody Demling as he recovered from COVID-19 | Norton Healthcare Louisville, Ky.

Jody went from receiving the sacrament of anointing the sick to breathing on his own during Holy Week. By the Wednesday after Easter, he was home from Norton Brownsboro Hospital and continuing his recovery. 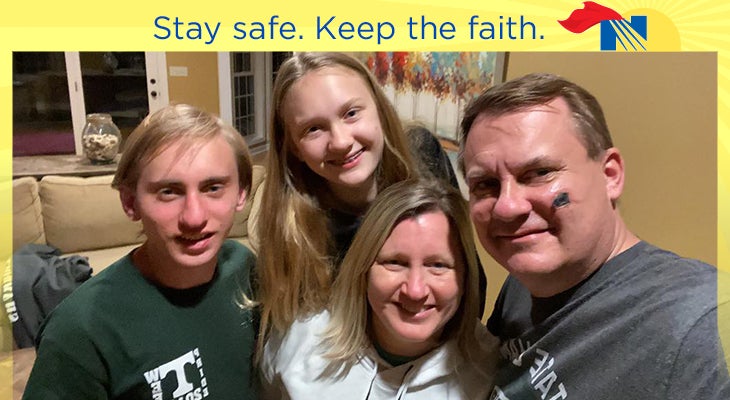 Louisville sports journalist Jody Demling doesn’t remember his parish priest, the Rev. William M. Bowling, administering the sacrament of anointing the sick. He can’t remember the nightly phone calls from his wife and children. Many of the health care providers who tended to him when no one else could are a blur.

He will never forget however, a special Holy Week, when he began to emerge from the worst of COVID-19. By the Wednesday after Easter, he was home to continue his recovery following a nearly two-week hospitalization that included needing a ventilator to help him breathe.

Unable to walk and barely able to breathe

Jody first started feeling ill about three weeks earlier. Chills and a temperature of 101 led to nausea and fatigue. But after a week, he was feeling better and grateful that it seemed to be over.

It wasn’t. That night, the coughing started and lasted through the night.

Related: Health care providers are rescheduling appointments, but don’t hesitate to call the office yourself

“I woke up and I sneezed and I felt like my bones were breaking. It hurt so bad to sneeze. And then, I noticed a little bit of shortness of breath,” Jody said.

His wife, Angela, and their two children had quarantined themselves from Jody. When Angela checked on him that morning, he told her he couldn’t breathe.

The severe symptoms came on fast.

“That’s what’s so weird. It just, all of a sudden, just hit me, on that Wednesday night,” he said.

“I’m trying to get up, and I couldn’t walk,” he said. “They gave me oxygen right away and wheeled me out.”

At the emergency department at Norton Brownsboro Hospital, Jody’s temperature was pushing 104.5. The emergency staff took chest X-rays, ran other tests and moved him to the intensive care unit.

The next morning, Megan D. Adami, M.D., a hospitalist, showed him the X-ray. His lungs were black — all black.

“I could tell by the look on her face I was in trouble,” he said. She started him on medication and told him he needed to be on a ventilator. He would spend part of his time prone — lying on his front — to put different parts of his lungs to work.

He spoke to his wife, and within a couple hours, the ventilator was helping him breathe. From meeting the anesthesiologist to when he started regaining consciousness six days later, he remembers nothing.

As he woke up, it was a Wednesday night and storms were passing through. Unable to move his arms and legs or speak, he tried to alert the nurse that there was something stuck in his eye. With Jody furiously batting his eyes, she figured it out.

She wiped out his eyes. He grabbed her hand and was so grateful.

“I think that moment it all just hit me and for the rest of that night … I just lay there, and I was just really calm knowing that, OK, in the morning, they’re going to take this thing out and then I’m going to be able to kind of start my road back,” he said.

The ventilator was removed on Holy Thursday. By Good Friday, Jody was texting with his pastor at Holy Trinity. He also texted with his former pastor at Holy Trinity, the Most Rev. J. Mark Spalding, now bishop of Nashville, Tennessee. His uncle, the Rev. Leo Gahafer, deacon at St. Brigid Catholic Church in Johns Creek, Georgia, sent prayers.

For a deacon, priest and bishop, Holy Week is the busiest time of year. Yet Jody heard from them on a daily basis, and they checked in on Angela and the kids.

“I had some very holy people in my corner who were kind of starting to lead me down a path to wherever I need to go now in order to do what he says I need to do,” Jody said. “It wasn’t my time, and it tells me that God has a plan for me.”

Vaccines are not available at testing sites.

COVID-19 tests are available at drive-thru or in-person locations by appointment.

Vaccines are not available at testing sites.

COVID-19 tests are available at drive-thru or in-person locations by appointment.